Depoliticization presents itself to us both as a theoretical and a practical-political problem. The argument of the thesis aims to develop depoliticization as a philosophical concept which gains its impetus from and is tested against the politics of the European Union (EU). My approach to depoliticization (critique) is that ethics provides part of the solution, rather than simply being part of the problem. After a conceptual reflection, I analyze EU politics in terms of its modes of self-justification, the incontestable nature of some of its central institutions, and its one-sided reliance on negative integration through juridical means. In an attempt to develop the relationship between politics and ethics more constructively, I then develop an account of both direct and indirect relations.

A key aspect of my analysis is the distinction between localized and generalized depoliticization critique – only the latter extends to the ontological dimension, which is why the former falls short. This leads to an ambiguous patchwork of politicizing and depoliticizing effects, which is illustrated by the development of the ethical-political relationship between Rousseau and Schmitt. These are what I call direct relations between politics and ethics, in which ethics is directly ‘brought’ to politics.

I then consider indirect relations, in which a specific procedure is interposed: I consider Habermas’ proposed reforms of EU politics, and interpret Rawls’ political liberalism as a complementary account. In the end, direct relations between politics and ethics are found to be insufficient by themselves, and indirect relations, while promising, end up depoliticizing in ways that complement each other as much as the relations themselves. In order to remedy these flaws, I introduce a notion of political engagement that combines what is promising about direct and indirect relations. Political engagement combines a polemical politics with the shutting out of depoliticizing effects and is thus able to politicize across the board, fulfilling the requirement of generalized depoliticization critique. Europopulism, which I define in connection with Laclau, is my proposal to extend political engagement to European politics. 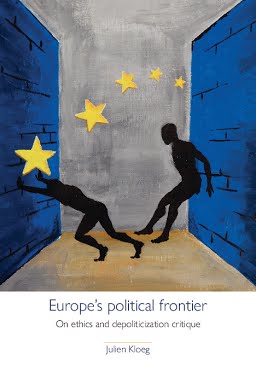