A mixed-method study into military Afghanistan autobiographies from the US, the UK, Canada, Germany and the Netherlands published between 2001 and 2010.

Although there are quite a few soldiers who write autobiographies about their deployment experiences, a comprehensive profile does not exist that provides reliable, quantifiable insight into 21st century soldier-authors that exceeds the Anglo-American view, especially when it comes to (self-published) books. This study makes up for these deficiencies by studying all non-fiction, autobiographical books, first published between 2001 and 2010 in Dutch, English or German in the US, the UK, Canada, Germany and the Netherlands that (mainly) deal with the deployment experiences of military personnel in Afghanistan and are intended for the public at large.

It provides answers to four questions:
1. Who are the soldiers who write autobiographical books about their deployment in Afghanistan?
2. Who are their publishers?
3. What do they write about?
4. Why do they say they write?

To answer these questions, this study uses statistical analysis in combination with qualitative descriptive coding techniques to provide a cross-cultural analysis of five different Western countries. It is an interdisciplinary study, using and combining theories and methods from five different fields: sociology, history, literature, psychology and anthropology. One of the conclusions from this research is that in the countries studied there is a very strong relationship between the number of soldiers that have been deployed to Afghanistan and the number of books produced. For every 6,000 soldiers in Afghanistan, one extra mission-related autobiographical book is published. Another main conclusion is that the soldier-authors of these books are only partly (when it comes to branch of service and gender) representative of the average soldier. Particularly noticeable is that where the average soldier is deployed with his own unit, the average soldier-author is often (50%) individually deployed. This result was predicted by what is called in this study the ‘fringe writer hypothesis’. In some countries, the majority (Germany) or even all military autobiographies (the UK, Canada) are published by publishers that invest at their own cost and risk in these books (‘traditional publishers’), in other countries (the US, the Netherlands) there is also a large self-publishing market for military books. Most military autobiographies are still published with traditional publishers, which are hardly ever specialized military publishers, but normally general publishers. These traditional publishers are looking for the traditional soldier: a soldiers who has been deployed more than once, preferable with his or her own unit, is a professional, not a reservist, with a junior rank and a kinetic background. This ideal commercial writer, however, neither exactly resembles the average soldier, nor the average soldier-author. Whether a soldier-author’s book will have a positive or a negative plot can be reasonably predicted by looking at two author characteristics. Authors who still work for the Ministry of Defence when their book is first published generally write positive plots, and kinetic soldiers predominantly write negative plots. The research into plots confirmed Harari’s revelatory plot thesis, which predicts that the majority of contemporary military autobiographies either has a disenchantment plot or a growth plot. At the same time it showed that Fussell’s disillusionment thesis (that military autobiographies have predominantly disenchantment plots) is no longer valid in the 21st century Afghanistan autobiographies that are written by professional soldiers, instead of conscripts. The specific choice of plot is country-dependent and related to that country’s strategic narrative on war in general, and on the mission in Afghanistan in particular. In a nowadays pacifist country like Germany, the disenchantment plots prevail, for example, whereas in a militarily ambitious country such as the UK growth and action plots dominate. Almost all soldier-authors researched offer some kind of motivation why they write. Four main reasons can be distinguished: getting recognition, enabling change, helping others or helping themselves. What is striking is that intrapersonal reasons (such as helping others or enabling change) are far more common than personal reasons such as helping yourself. Self-help motives in general are mostly given by individually deployed soldiers. The study ends with some recommendations for further research, that include validating the results found in this study by looking at other countries, non-military autobiographies books and by researching the illustrations found in these books. 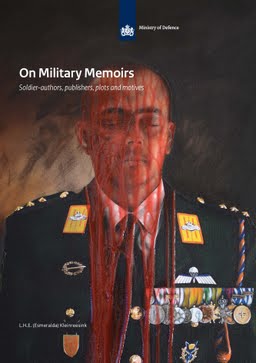