Legitimizing inequality : a political ecology of water in the Waterberg, South Africa

This dissertation is about inequality in water access in former ‘white’ rural South Africa. It advances two major arguments. First, water inequality has largely been normalized and naturalized in the post-apartheid order. Second, instead of being only a legacy of colonialism and apartheid, water inequality is being continuously reproduced as a result of contemporary processes of neoliberal accumulation, both private and public. As a political ecology analysis, this thesis questions discourses of an imminent and ‘natural’ water scar-city crisis, by showing how scarcity is produced in a context of abundance of resources and causes racialized dispossession. Moreover, it rejects the narrative of a service delivery crisis, by demonstrating how water access is embedded in a system of power relations that transcend the working of local government and its supposed failures. Instead, the land-water nexus emerges as crucial, meaning that access to water ultimately depends upon access to land and is mediated through private property rights.
My arguments are based on a specific historico-geographical context, namely the Waterberg plateau in the northern province of Limpopo, where I have conducted one year of ethnographic fieldwork. The Waterberg used to be a ‘white’ farmland growing crops and livestock, whereas now it has mostly converted to wildlife-based production via private conservation activities, such as game farms and private nature reserves. Following this and other agrarian changes, farm workers and dwellers have been relocating forcibly or voluntarily from the farms to the small rural town of Vaalwater. Here, however, they lack continuous and secure access to water. This dissertation contends that this particular segment of the black rural poor has become surplus both to the needs of capital in the new conservationist mode of production and to the politics of place of white landowners. Thus, they have been abandoned by the state, which refuses to reallocate additional resources from productive uses to water service provision in town.
In developing my arguments, I start from the history of the Waterberg’s waterscape, which shows a number of continuities among the colonial, apartheid, and post-apartheid periods. After that, I situate the local water problems within the broader context of the South African water reform. Although the reform aims to redress past racial discrimination in access to water, redistribution is fundamentally constrained by several structural elements. For in-stance, white commercial farmers maintain exclusive control over ‘their’ wa-ter resources. As a result, they continue to employ millions of litres of water every day, whereas town residents cannot satisfy their most basic water needs.
A central concern of this dissertation is to recognize water inequality, by unravelling the connections between the black town and white farms. And yet, an even more compelling question is how water inequality is being repro-duced in contemporary South Africa. I point out two main processes in this regard. First, the simultaneous commodification of both water resources and water services. This contributes to normalize uneven patterns of access to and use of water (along racial and class lines), in that everyone is free to and responsible for participating in the market for water. Second, neoliberal conservation and the tightening of private control over water implicit in that. Nature conservation has largely been absent from the South African water debate. However, not only are game farms and private nature reserves important water users, but also and especially they tend to naturalize water inequality by depicting the Waterberg as an empty wilderness and questioning the presence and water demands of the black poor. 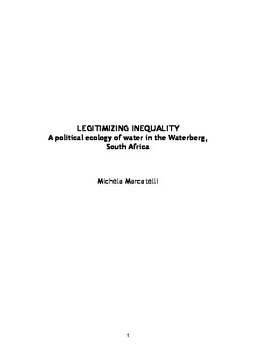