The politics of control : New dynamics of agrarian change in Bolivia's Soy Complex

Around the world, plantation economies are on the rise. Increasing concerns over food, energy, and financial security combined with a geopolitical restructuring of the global agro-food system have led to a new wave and rush to secure control over resources. Corporate-controlled agro-industrial complexes – from seed to silo – have extended their reach geographically and produced new spaces for capital to penetrate, circulate, and accumulate. New actors and forms of capital penetration have entered the countryside, transforming the forms and relations of production, property and power. Soybeans, with industrial inputs ‘upstream’ and storage, processing and transportation ‘downstream’, have become a quintessential agro-industrial ‘flex crop’, used as feed, food, fuel and industrial materials. This study analyzes how and the extent to which the development and expansion of the soy complex in Bolivia is transforming the countryside. New processes of productive exclusion have emerged, value-chain control and appropriation have materialized, and the very extractive character of the soy complex has severe implications for society, the economy and the environment. These dynamics of agrarian change are not unique to Bolivia nor the soy complex, but characteristic of the broader changes taking place in the global agrofood system dominated by agro-industrial complexes.
This study puts forth an analytical framework referred to as the politics of control which captures the new forms and mechanisms of resource control and value appropriation (or extraction) through an analysis of access rather than property or concessional rights. An analysis into the new forms of control contributes to a better understanding of class formation, differentiation, and class consciousness. These new forms of control are conceptualized as ‘productive exclusion’ and ‘value-chain control’. The politics of control also requires an analysis into the role and nature of the capitalist state. The strategic relations among state and societal actors in gaining and maintaining control over the state apparatus are analyzed in the context of the need to balance the social contradictions of capitalism which entail facilitating the conditions for accumulation and social legitimacy. Understanding these complex relations through the ‘state-society-capital nexus’ helps us conceptually to grasp the relations and interactions among elected and non-elected state managers and the various class fractions of labour and capital in their historic contexts.
This analysis of Bolivia’s soy complex is explored within its broader three-pronged neo-extractivist development strategy based on minerals, hydrocarbons, and soybeans. Within this neo-extractivist model, the soy complex is characterized as a type of ‘agrarian extractivism’, revealing the very extractivist social, economic and environmental dynamics associated with soybean production in Santa Cruz. ‘Agrarian extractivism’ not only reveals the extractive dynamics of capitalist industrial agriculture, it also challenges dominant discourses legitimating this form of production as a means to achieve rural development and food security. Within the context of Bolivia’s first indigenous president, Evo Morales, and the Movement Towards Socialism (MAS) as a ‘government of social movements’, fundamental contradictions abound.
This study ultimately argues that the new forms and mechanisms of control and extraction which characterize the soy complex are leading to a truncated trajectory of agrarian change where the rural majority are excluded from accessing the means of production without prospects for labour absorption elsewhere. The soy complex has rendered the Bolivian economy and society vulnerable to volatile commodity prices, threatening their food security with an increased dependence on food imports. The forms of exclusion and control require farmers to bear the risks of production while the corporate-controlled market oligopoly appropriates the majority of the value produced. While the majority of the excluded smallholders have maintained formal ownership over their land, this trajectory is not a pre-determined outcome but will depend on the balance of forces in society and the contested relations within the state-society-capital nexus. 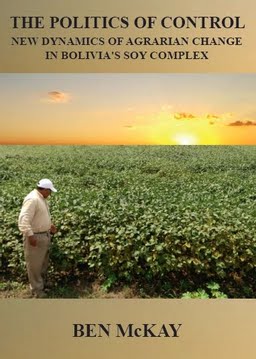