Plotlines of Victimhood : the Holocaust in German and Dutch history textbooks, 1920-2010

Before the 1960s, most history textbooks in Western Europe hardly contained any information about the ‘Holocaust’. This was partly because contemporary history still was a rudimentary part of the history curriculum. In addition, many teachers and textbook authors did not seem to be willing to discuss the persecutions of the Jews in class. Other (military) aspects of the Second World War gained more attention. Anno 2017, the situation has changed completely: the Holocaust has become one of the most important historical themes in the national curricula of many (western) countries. In 2010 (the last year of my research period), National Socialism and the Holocaust have become mandatory parts of the secondary education curricula in Germany and the Netherlands. In this dissertation I have studied fifty years of narrating the Holocaust in history textbooks for upper secondary education, published between 1960 and 2010, in North Rhine-Westphalia (one of the federal states of Germany) and the Netherlands. Although the number of Holocaust studies has increased sharply since the 1990s, comparative research into the Holocaust in education and textbooks is scarce.

In both countries, the Holocaust receives more attention over the years, and there is room for other victim groups such as Sinti, Roma, handicapped people, Soviet POW’s and Poles. Didactical changes are imminent: textbooks provide more illustrations, assignments, primary sources and web-support. In the textbooks, Auschwitz-Birkenau has become the ultimate symbol of the Holocaust, which seems to demonstrate the Western European perspective on the Holocaust; the events in Eastern Europe do not play a significant part in Holocaust narratives. In both countries, textbooks continue to use the perpetrators’ perspective through using Nazi-terminology without proper contextualization and relatively marginalizing (Jewish) victimhood.
Most recent German textbooks demonstrate forms of collective accountability for the tragic events, are very thorough in describing the Holocaust and treat the topic as an international set of events. Dutch textbooks continue to witness the persecutions as a matter between the Nazi’s and the Jews, have no attention for the responsibility of Dutch officials, and in general see the Holocaust as a by-product of WWII. Information on the Holocaust in the textbooks is brief, insufficient and often incorrect and incomplete. Instead, the national trauma of the occupation in 1940 is highlighted.

The recommendations following this research are enhancing closer relationships between textbooks authors, publishing companies and academic researchers, deconstructing national narratives through offering international multiple perspectives and conflicting opinions, and engaging more research into the use of history textbooks in education, especially about taxing subjects as the Holocaust. 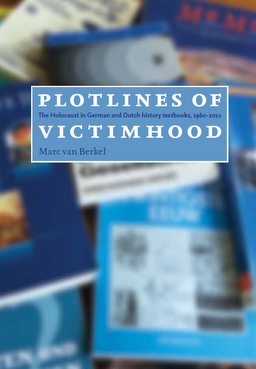