Disability-adjusted life-years (DALYs) for 315 diseases and injuries and healthy life expectancy (HALE) in Iran and its neighboring countries, 1990–2015

BACKGROUND: Summary measures of health are essential in making estimates of health status that are comparable across time and place. They can be used for assessing the performance of health systems, informing effective policy making, and monitoring the progress of nations toward achievement of sustainable development goals. The Global Burden of Diseases, Injuries, and Risk Factors Study 2015 (GBD 2015) provides disability-adjusted life-years (DALYs) and healthy life expectancy (HALE) as main summary measures of health. We assessed the trends of health status in Iran and 15 neighboring countries using these summary measures. METHODS: We used the results of GBD 2015 to present the levels and trends of DALYs, life expectancy (LE), and HALE in Iran and its 15 neighboring countries from 1990 to 2015. For each country, we assessed the ratio of observed levels of DALYs and HALE to those expected based on socio-demographic index (SDI), an indicator composed of measures of total fertility rate, income per capita, and average years of schooling. RESULTS: All-age numbers of DALYs reached over 19 million years in Iran in 2015. The all-age number of DALYs has remained stable during the past two decades in Iran, despite the decreasing trends in all-age and age-standardized rates. The all-cause DALY rates decreased from 47,200 in 1990 to 28,400 per 100,000 in 2015. The share of non-communicable diseases in DALYs increased in Iran (from 42% to 74%) and all of its neighbors between 1990 and 2015; the pattern of change is similar in almost all 16 countries. The DALY rates for NCDs and injuries in Iran were higher than global rates and the average rate in High Middle SDI countries, while those for communicable, maternal, neonatal, and nutritional disorders were much lower in Iran. Among men, cardiovascular diseases ranked first in all countries of the region except for Bahrain. Among women, they ranked first in 13 countries. Life expectancy and HALE show a consistent increase in all countries. Still, there are dissimilarities indicating a generally low LE and HALE in Afghanistan and Pakistan and high expectancy in Qatar, Kuwait, and Saudi Arabia. Iran ranked 11th in terms of LE at birth and 12th in terms of HALE at birth in 1990 which improved to 9th for both metrics in 2015. Turkey and Iran had the highest increase in LE and HALE from 1990 to 2015 while the lowest increase was observed in Armenia, Pakistan, Kuwait, Kazakhstan, Russia, and Iraq. CONCLUSIONS: The levels and trends in causes of DALYs, life expectancy, and HALE generally show similarities between the 16 countries, although differences exist. The differences observed between countries can be attributed to a myriad of determinants, including social, cultural, ethnic, religious, political, economic, and environmental factors as well as the performance of the health system. Investigating the differences between countries can inform more effective health policy and resource allocation. Concerted efforts at national and regional levels are required to tackle the emerging burden of non-communicable diseases and injuries in Iran and its neighbors. 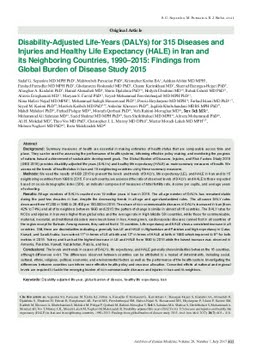