Falls in old age: pills, the heart and beyond: Withdrawal of drugs and screening for cardiovascular causes in older fallers

Fall incidents are common in old age, with a rising injury rate with increasing age. Falling is not a diagnosis per se, but a symptom that can result from a number of diseases and abnormalities. However, even though there are abundant studies addressing possible causes of fall incidents in older persons, there are still quite a few unresolved questions. In this thesis, we focus on two groups of (possible) fall-risk factors. First, we address cardiovascular risk factors for falls and second, we elude on the effects of withdrawal of drugs that are known in the literature to increase fall risk. Chapter 1 gives a general introduction to this thesis. Chapter 2 contains a selection of case reports regarding drug-related falls. These patients prompted us to conduct a prospective cohort study on this topic. In all these patients, falling was attributed to the use of certain drugs and fall incidents ceased after withdrawal of these drugs. Chapter 3 focuses on cardiovascular determinants of falls. In chapter 3.1 the association between echocardiographic abnormalities and fall incidents was investigated in a prospective cohort of geriatric outpatients. It is generally accepted that certain structural cardiac abnormalities, like for example aortic valve stenosis, mitral valve regurgitation and pulmonary hypertension can result in syncopal events. We showed that there was a significant association with fall incidents for both valvular regurgitations and pulmonary hypertension. Fall risk increased with increasing severity of the abnormality. No relation was found between aortic valve stenosis and fall incidents, probably due to a lack of moderate and severe stenoses in our follow-up group. In chapter 3.2 the association between left ventricular systolic function, as measured with echocardiography, and fall risk was examined in the Rotterdam study. The risk of a serious fall incident during follow-up was significantly higher if left ventricular ejection fraction was impaired. In chapter 3.3 the optimal measurement method of orthostatic hypotension in relation to falls was studied. Within a cohort of geriatric outpatients it was investigated which time average of continuous- finger-blood-pressure measurement showed the best association between OH and falls. This was also compared with conventional sphygmomanometer measurements. The best association was found when using 5-second averages of the continuous measurement method. Since the aetiology of falls is often multifactorial, orthostatic hypotension and falls remained poorly correlated, irrespective of the method or time average that was applied. The studies described in chapter 4 concern the relationship between the use of fall-riskincreasing drugs and falls, including the pathway leading to these fall incidents. In chapter 4.1 fall risk after withdrawal of certain drugs is tested in a cohort of geriatric outpatients. Several drugs have been associated with an increased fall risk, but it is not yet known if withdrawal of these drugs leads to a decrease in fall incidents. This study indicates that withdrawal of all fall-risk-increasing drugs, including both cardiovascular and psychotropic drugs, is an effective intervention for lowering falls incidence. The effect was highest for Chapter 6 Summary/Samenvatting 129 withdrawal of cardiovascular drugs. The effect of withdrawal of fall-risk-increasing drugs on mobility test outcomes is shown in chapter 4.2. Mobility tests, such as the Timed Up and Go Test are well-established predictors for fall incidents. Falls due to usage of certain drugs might be largely or at least partly caused by the impairment of mobility that these drugs can generate. This was confirmed by our study, since alongside with a reduction in falls, 10-meter walking test and Timed Up and Go Test significantly improved during follow-up. Other adverse drug effects that might be important in the causal pathway of drug use and ensuing fall incidents are cardiovascular abnormalities, e.g. orthostatic hypotension, vasovagal collapse, and carotid sinus hypersensitivity. This was investigated in chapter 4.3. For this, the effect of withdrawal of fall-risk- increasing drugs on tilt-table test outcomes was tested. In our study orthostatic hypotension improved significantly after drug withdrawal. Subgroup analysis of cardiovascular drug withdrawal showed a signifi- cant reduction in both orthostatic hypotension and carotid sinus hypersensitivity. These results indicate that derangement of cardiovascular homeostasis may be an important mechanism by which drug use results in fall incidents. Chapter 4.4 deals with the cost-effectiveness of the intervention. Chapter 4.1-4.3 show that withdrawal of fall- risk-increasing drugs is clinically effective. However, given the continuous pressure on healthcare costs during the last decades, it is important to also address the cost- effectiveness of medical interventions. In our cohort, the intervention, i.e. drug withdrawal, was not only cost-effective; it also generated significant cost savings. Although the effect is likely to decrease over time, cost savings were already generated in the short run. Long- term management of drug withdrawal will require extra efforts, but is also likely to sustain the risk reduction. In the general discussion, chapter 5, the main findings of this thesis are discussed and put in a broader perspective. The results indicate that there is room for improvement in the multifactorial approach of older fallers. This appears to be true both for the assessment of cardiovascular abnormalities and for the withdrawal of fall-risk- increasing drugs. 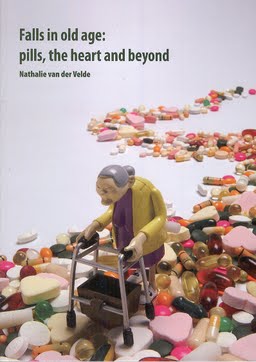