The Relation between Large-Scale Land Acquisitions and Rural Households: Evidence from Ethiopia and Tanzania

The aim of the thesis is to understand the impact of large-scale foreign land acquisitions on rural households. The rapid expansion of large-scale land acquisition (LSLA) by foreign investors in developing countries over the past 10 years has precipitated a heated debate over the impacts on rural households in the recipient regions. LSLA brings often much-needed investment to agriculture in developing countries, potentially raising productivity, and creating rental and labour opportunities from which rural households can benefit. These benefits to smallholders depend crucially on legal, institutional and economic factors including the strength and distribution of property rights over the land and natural resources sought by foreign investors, and the wage labour opportunities created by the investment.

None-the-less, qualitative assessments of the impacts of large-scale foreign land acquisitions have raised serious concerns about possible negative impacts on rural households, including un(der)compensated transfer of village land to investors, forced relocation to less productive and smaller areas, and reduced access to ecosystem goods and services (including fresh water, game and forest products). Given the scale of LSLAs happening in countries like Ethiopia and Tanzania, there is urgent need to objectively assess whether such negative outcomes are also balanced by positives, and the extent to which they constitute exceptions or the norm. In order to address the research question, I consider four key pathways of influence of LSLA on rural households: Access to land, returns to land, returns to labour and price of agricultural goods.

After an introductory first chapter, the second chapter defines the four pathways, provides an overview of the challenges that rural households face through the development process analyses how LSLA can integrate such process. The chapter shows the importance of national policy and institutional frameworks for shaping LSLA’s effect on rural households. The third chapter identifies the international, regional and national policy tools that regulate LSLA and rural households, including land access, environmental standards, labour rights and food security. The chapter highlights the differences in the land tenure system of Ethiopia and Tanzania, while describing the similar efforts by national governments to attract LSLA. The fourth chapter looks at the available qualitative evidence on the impact of LSLA on rural households in the two countries. The chapter’s main takeaway is that, despite the policy differences between Ethiopia and Tanzania, there are several elements of similarity in the reported effect of LSLA on the defined indicators of households’ welfare. The fifth chapter employs household survey data for both countries as well as data on land acquisitions to provide quantitative evidence of the impact of LSLA on rural communities. The chapter contributes to the newly-developing body of quantitative literature on the topic, providing a mixed picture of the impact of LSLA on the four defined pathways. 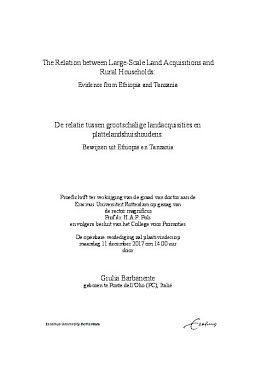