Menswear no longer lives in the shadow of women’s wear. According to a recent article from the Business of Fashion website, the growth of menswear has outpaced that of women’s wear since at last 2011. Until the 1970s, male fashion in Europe mainly focused on tailoring and smaller-scale production of ready-to-wear, or confection, producing shirts and underwear. One exception was the famous menswear tailoring industry in Leeds, England, which clothed British working-class and middle-class men in stylish suits for a century until its demise in the late twentieth century. London’s Savile Row traditionally set the trends in for the high end of the industry. After the 1970s, men’s ready-to-wear and men’s haute couture start to grow elsewhere in Europe. Trends and styles in menswear change much more slowly than in women’s fashion; however, the pace of those changes is increasing. One of the world’s most important players for menswear is the international fashion trade fair Pitti Uomo in Florence, Italy. Pitti Uomo was established in 1972 under the umbrella of the non-profit organization Centro di Firenze per la Moda Italiana (CFMI-Florentine Centre for the Italian Fashion), which today is the holding of Pitti Immagine (officially born in 1988). This chapter investigates the rise of Pitti Uomo and its role in the menswear industry. Instead of focusing on fashion fairs in large established global fashion capitals, such as Milan, Paris, or New York, this study is centered on Florence, Italy, a second-tier fashion city that his home to one of the most important international fashion fair organizations. It looks at the strategies of Pitti Immagine and Pitti Uomo and the perspectives of the fashion designers and brands that exhibited at this menswear trade show in order to explain how this important fair stayed competitive and affirmed its role as one of the key intermediaries in the globalized and highly segmented fashion industry. In doing so, the chapter unravels the strategies of the trade fair as an intermediary adapting to the global and digital marketplace. It shows how the trade fair remains an important intermediary in the process of trend development. As noted by fashion business scholar Tim Jackson, “buyers and fashion designers are able to predict what is likely to be “in fashion” through a combination of influences, including reviewing important textile and style magazines, the specialist services of forecasting trend agencies, and visits to textile and garment fashion shows”. The chapter uses a qualitative methodology; besides the analysis of published materials within the fashion industry and the documentation from Pitti events (e.g. documents, websites, magazines, press releases), it draws data collected from interviews with independent fashion designers who focus on menswear, and with buyers, other experts, and key informants in the European fashion industry. The chapter situates the case of Pitti Uomo within the framework of cultural economics and economic geography. The analysis is informed by studies on the economic exchange of cultural goods, studies on temporary clusters, and the recent exhibition and book, The Glamour of Italian Fashion Since 1945, edited by Sonnet Stanfill for the Victoria and Albert Museum in London. This chapter contributes to debates on the role of trend forecasting and cultural intermediaries in the digital age. 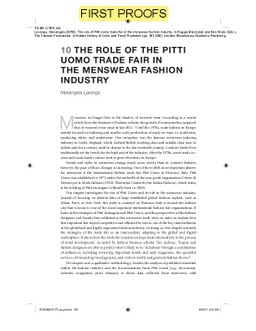