The Circadian Clock-Cell Cycle Connection and its Implication for Cancer

Life on earth is exposed to a 24-hour light/dark cycle generated by the earth rotation around its own axis. Almost all living organisms have developed an internal timing system, called “the circadian clock”, to adapt to the daily environmental changes. The circadian clock system gives a 24-hour rhythmicity to various physiological processes (such as behavior, metabolism, sleep wake cycle, and hormone secretion) to optimize them to an exact time of the day. Mammalian circadian system is organized in a hierarchical manner with the superchiasmatic nucleus (SCN) as the master clock at the top of hierarchy, and peripheral clocks in almost all the single cells over the body. The SCN is located in the hypothalamus of brain and is composed of approximately 20,000 neurons. Light information is received by the photoreceptors located in the ganglion cells in the inner nuclear layer of the retina and transmitted to the SCN neurons. Subsequently, synchronizing signals coming from the SCN are trans- mitted to the peripheral clocks via hormonal and neural cues. Therefore, the whole organism is synchronized internally and synchronized to the external environment. At the molecular level, the circadian oscillator is based on autonomous and auto-regulatory feedback loops. The CLOCK/BMAL1 heterodimer induces E-box transcription of Per (Per1, Per2) and Cry (Cry1, Cry2) genes. PER and CRY proteins accumulate in the cytoplasm and after a delay of several hours translocate to the nucleus where they inhibit CLOCK/BMAL1-mediated transcription. The whole process follows a circadian periodicity close to 24-hours. CLOCK/ BMAL1 heterodimer also induces E-box transcription of the so-called Clock Controlled Genes (CCG), composing 10% of the whole genome. Clock controlled genes are involved in the regulation of a variety of physiological events such as the cell cycle process. The cell cycle is another independent oscillatory system, governed by sequential events of transcription, and protein degradation. The circadian clock and cell cycle systems are tightly coupled and interact in a bi-directional way, meaning that synchronization of the circadian system using clock synchronizers, such as dexamethasone, will entrain mitosis. On the other hand, the circadian oscillator is reset by each mitotic event.
In chapter 2 we investigated the importance of these reciprocal interactions by knocking down the positive circadian elements (Bmal1 and Clock genes). Using the NIH3T33C mouse broblast cell line (carrying uorescent reporter genes for clock and cell cycle phase), we have shown an increased cell cycle length by about 4 hours in Bmal1 knock down cells. We found that the slower cell cycle progression originated from a delayed G2/M transition caused by an impaired G2 speci c expression of Cyclin B1. In chapter 3, we knocked out the cryptochromes (Cry1-/-, Cry2-/-) in the NIH3T33C cells and investigated cell cycle progression in the absence of negative circadian elements. We have shown a decrease of 2 hours in the total cell cycle length, arising from a short G1 phase. Further molecular analysis revealed involvement of the cryptochromes on G1/S transition by regulating Cyclin E expression. Moreover, a high phosphorylation pattern of mitotic proteins in Cry1-/-, Cry2-/- cells, together with a high percentage of mitotic cells, indicated impaired mitotic progression in cryptochrome de cient cells. Our data demonstrate that post-translational regulation of mitotic proteins is affected in the absence of cryptochromes. In chapter 4, we studied the importance of coupling between the circadian clock and cell cycle machineries in cancer cells. We have stably introduced a circadian clock reporter (REV-ERBα promotor) into a mouse breast carcinoma cell line derived from heterozygous p53-R270H/+ WAPCre mice (MBC399). Using this system, we have followed the kinetics of circadian clock and cell cycle progression in real time and at the single cell level. We observed that the cellular clock/cell cycle coupling is lost in MBC399 cells. In contrast to the NIH3T33C cells, cell division occurred independent of the circadian time in MBC399 cells. Our results highlight the importance of the cellular clock/cell cycle coupling in controlling the proliferation rate, which is lost in MBC399 cells. In chapter 5, the effect of circadian clock gene knock-down on the cellular properties of human lung carcinoma cell lines (H1299 cell) was investigated. We have performed a transcriptome analysis on a panel of clock knock down H1299 cell lines. It appears that cancer and cellular growth are two of the top affected processes in all the clock knock down cell lines. Processes related to cancer, such as tumor formation and proliferation of malignant cells, were down regulated in Bmal1 knock down cells and up-regulated in cryptochrome de cient cells. In line with the transcriptome analysis, our in vivo study shows suppressed and accelerated tumor formation in Bmal1 knock down and cryptochrome de cient cells, respectively. Overall, our transcriptome analysis, together with the in vivo studies, showed a prominent involvement of core circadian clock genes on the proliferation capacity of tumor cells, as well as tumor forming ability. The effect observed makes the circadian clock genes attractive targets in cancer therapy. 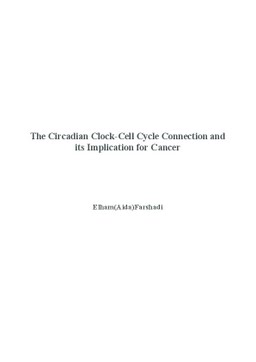