Introduction Many authors have reported on a myopic post-operative refractive prediction error when combining phacoemulsification with pars plana vitrectomy (phacovitrectomy). In this study we evaluate the amount of this error in our facility and try to elucidate the various factors involved.

Methods This was a retrospective study which included 140 patients who underwent phacovitrectomy (39 with macular holes, 88 with puckers, and 13 with floaters). Post-operative refractive error was defined as the difference between the actual spherical equivalent (SEQ) and expected SEQ based on the SRK/T and Holladay-II formulas. Both univariate (paired t test, independent t test, one-way analysis of variance, or Mann–Whitney test) and multivariate (regression analysis) statistical analyses were performed.

Conclusion Various factors are involved in determining the myopic refractive error after phacovitrectomy. Not every factor seems to be as important in each individual patient, suggesting a more tailored approach is warranted to overcome this problem. 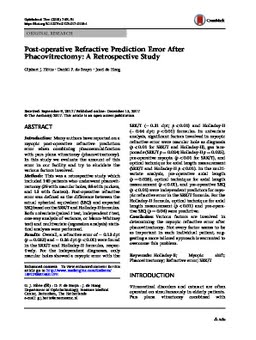