Dialysate as Food: The anabolic effects of combined amino acid and glucose solutions in peritoneal dialysis

Up to 50% of uremic patients, including those treated with peritoneal dialysis (PD), suffer from protein and energy malnutrition (PEM). Malnutrition is strongly associated with an increased morbidity and mortality, in particular from cardiovascular diseases. Inflammation, low nutrient intake due to anorexia, and peritoneal losses of amino acids and proteins are important factors contributing to malnutrition. In the Introduction to the thesis, the peritoneal dialysis procedures and the pathogenesis of malnutrition in peritoneal dialysis (PD) patients are described. Methods to assess the nutritional state are mentioned. Protein and amino acid (AA) metabolism and the methods to measure nitrogen balance and whole-body protein turnover (WBPT) are outlined. The composition, the characteristics and the previously conducted studies of AA-based PD fluids are described and the aim of the thesis is put forward. The main theme is to determine whether the nutritional state of PD patients can be improved by modulating conventional PD fluid. In chapter 2 we report a high prevalence of malnutrition in PD patients treated in the Erasmus MC using a clinical screening tool, the subjective global assessment (SGA). A good correlation was demonstrated between the original SGA and body composition measurements. SGA proved to be a practical screening tool to assess malnutrition in PD patients, BIA and DEXA, however, provide additional information on body composition and may be used to follow up changes in lean body mass or fat mass. In chapter 3 we investigate the metabolic effects of solutions containing combined AA plus glucose in 8 patients on APD, given as part of their regular overnight dialysis scheme, as compared with glucose-only dialysate. These effects of the AA plus glucose containing dialysis solutions were evaluated by measuring WBPT with L- [1-13C]leucine. Dialysis solutions containing AA plus glucose improved protein anabolism in the fasting state. A prolonged anabolic effect of the mixture on protein metabolism could not definitely be shown by classical nitrogen balance studies. No intolerance of the solutions was observed. Administering a dialysate composed of a mixture of AA and glucose for a longer period might improve the nutritional status of patients treated with APD, whose dietary protein intake is inadequate, but this needs to be confirmed by prospective studies. In chapter 4 we studied the acute effects on the protein metabolism of combined AA plus glucose dialysate compared with glucose-only dialysate by performing WBPT study in CAPD patients in the fed state. Although the amount of AA absorbed from the peritoneal cavity was small in comparison with oral AA intake, there was a significant increase in protein synthesis with AA plus glucose dialysate compared with glucose only. The ingested protein was used mainly for stimulation of protein synthesis, while feeding did not further reduce protein breakdown, which was already inhibited, probably by the moderate hyperinsulinemia induced by glucose-containing dialysis solutions in the fasting state. Thus, AA administered Ã ntraperitoneally have similar anabolic effects to oral feeding, which lead us to call this concept â€˜dialysate as food.â€™ In addition we showed that the anabolic effects of AAG dialysate are more pronounced in malnourished patients. Giving a dialysis solution that c! ontains a mixture of AA plus glucose in addition to their daily food intake might therefore be of benefit to CAPD patients who are unable to meet their requirements due to a poor appetite. In chapter 5 we showed that neither intraperitoneal amino acids nor oral feeding induced a significant increase in the fractional synthese rate of albumin (FSR-albumin), despite of a substantial increase of WBPT. These findings indicate that whole-body protein synthesis (WBPS) and the FSR-albumin respond differently to intraperitoneal and oral AA. As suggested by previous studies, the supplied essential AA are probably mainly used for muscle protein synthesis rather than for hepatic protein synthesis in clinically stable and well-nourished PD patients. In chapter 6 we present the results of a comparison of the WBPT data measured with the end-product method with [15N]glycine with those derived from measurements using the precursor method with a primed constant infusion of L-[1-13C]leucine. Although the absolute values of the components of WBPT are different, the calculation of the final outcome, i.e. the net protein balance, showed a good correlation between both measurements. As the more strict and standardized protocol, the variability within the group is lower with the precursor method. At present the choice between the precursor and the end- product method will ultimately depend on the purpose of the study and on practical considerations. In chapter 7 we reported that APD dialysis fluid containing a mixture of amino acids plus glucose increased intraperitoneal appearance of proinflammatory cytokine, IL-6, as compared with dialysate containing only glucose, but the mixture did not affect peritoneal protein losses. The loss of amino acids into the 24 h dialysate with standard glucose solutions was similar as previously reported in CAPD. Chapter 8 provides a discussion and the conclusions of our results in a broader context. The assessment of the nutrition state in our PD population and the significance of the tools applied in the nutritional assessment are described. The effects of dialysate containing AA plus glucose on whole-body protein metabolism in PD patients in the fasting as well as in the fed state are outlined. The different response of intraperitoneal and oral AA supply on the albumin synthesis are also discussed. The applicability of the less invasive method to measure WBPT in PD making use of a single oral dose of 15N glycine is discussed. Peritoneal protein losses and cytokines generation during APD with AA plus glucose-containing dialysis solutions, and the peritoneal amino acids losses with standard glucose solution are described. The addition of AA to glucose-containing dialysis solutions is a promising approach to the long-term prevention and treatment of malnutrition in uremic patients undergoing peritoneal dialysis. Whether such an approach using dialysate as food will indeed have a beneficial effect on morbidity and mortality remains to be seen. 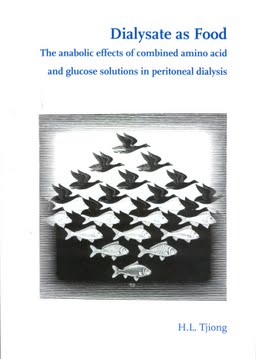