Organizing Democracy : Power concentration and self-organization in the evolution of Wikipedia

Many authors have narrated how new information and communication technologies enable people to collaborate and organize without central oversight or authorities. Such accounts often contrast open and self-organizing communities with rigid, hierarchical and introverted bureaucracies. While open and self-organizing communities thrive on the Internet, it is conceivable that this is not because they are fundamentally different from classic bureaucracies or oligarchies, but only because they are in the early stages of their development.

I conclude that Wikipedia does not exhibit tendencies of oligarchization; and that it is subject to ongoing bureaucratization. Over time, Wikipedia does exhibit various instances of centralization of its governance. Partly, these are the emergent consequence of self- organizations, as those volunteers who are more strongly engaged in the project, gain more authority. Besides that, I found instances in which Wikipedia’s informal representatives and its formal supportive organization, the Wikimedia Foundation, demand or appropriate the discretion to intervene in the course of the project’s self-organization, with the intent to sustain the organization and to realize its ambitions. These tendencies of centralization and power concentration do not seem to be instigated by a self-concerned and conservative elite, and these do not seem to be as deterministic as Michels portrays them, as these are, in various cases, successfully mitigated or counteracted by the platform’s constituents. Wikipedia’s continuous bureaucratization on the other hand, is hardly contested. Moreover it appears that bureaucratization is not a unilateral top-down measurement, but rather the consequence of Wikipedians’ ‒ i.e. both Wikipedia’s constituents’ and its formal representatives’ ‒ endeavors to effectively and sustainably organize their increasingly complex and large amount of work, as well as to safeguard Wikipedia’s democratic character. With the introduction of the concept of “self-organizing bureaucratization,” I contribute to the theorization of open and self-organizing communities in general. By this concept I grasp and explain tendencies of bureaucratization in endeavors to establish and maintain the democratic aspect of bottom-up organization: bureaucracy and technology play a crucial role in the organization of open and self-organizing communities as their presumed transparency, objectivity, predictability, reliability, and impersonality are broadly accepted and applied as legitimate means to meet the democratic objectives of striving for “equality for the law,” and “minimization of domination.” The theoretical amendment I wish to make to classical sociological theories on organizational evolution is that the reflexivity of both constituents and their formal representatives’ regarding the development of their intentionally democratic organizations should be explicitly considered as a crucial factor in the development of such organizations. 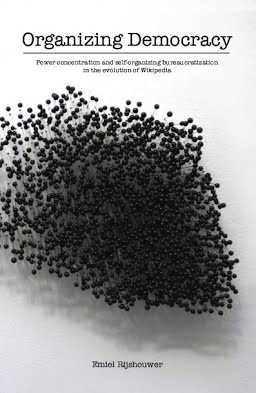