The aim of this PhD thesis is to investigate the correlation between the legal rules applied in an economy and its Foreign Direct Investment (FDI) inflows. The paper examines, from both a law and economics perspective, the development of legal rules in Egypt, Jordan and Morocco to promote investment and attract foreign inflows, and how this correlated with the actual volumes of FDI inflows into each of the three countries.

The thesis is split into seven chapters including the introduction and conclusion. Chapter II sets out the theoretical framework governing the thesis. It introduces the history of international investment law until the emergence of Bilateral Investment Treaties (BITs), the motives of policy-makers when engaging in BITs and, finally, the substantive protections of BITs. Chapter III provides a brief overview of the economic history of the three countries, from independence to market openness and passing through their debt crises. The chapter assists in identifying further similarities between the three countries.

Using a functional comparative analysis, the legal analysis begins in chapter IV with an introduction of the domestic legal framework governing investments in the three countries. This chapter takes the reader through the development of legislation in each of Egypt, Jordan and Morocco, with a specific focus on the alignment of domestic legislation in these three countries with the protections accorded under the BITs, and the changing nature of the legislation from being highly restricted to more liberal and market-oriented.

Chapter V continues the legal analysis but uses a case law analysis approach when exploring the claims filed against the three countries in ICSID arbitration. The chapter analyses a set of cases for each of the three countries in order to draw conclusions regarding their understandings of international investment law and their behaviour towards foreign investors.

Chapter VI proceeds with the economic analysis of the FDI volumes in the three countries. Based on the chosen set of variables, the chapter mainly through descriptive analytics identifies correlations and patterns between the reviewed variables and the net FDI throughout the study period in the three countries. The analysis remains limited to correlations and not causations.

Finally, the thesis concludes with statements of both a legal and economic nature. On the legal side, Egypt, Jordan and Morocco continuously developed their investment legal frameworks, seeking the enhancement of their investment climates in order to attract investors through rationalizing the factors of production prices, reducing transaction costs of investments, and mitigating the risks borne by investors. Further, the three countries similarly adapted their economies from being centrally-planned, highly regulated and investment restrictive to becoming more private-sector based, deregulated and investment friendly. On the economic side, the investment legal restrictions proved to be positively correlated to the net inflows of FDI of Egypt, while the two variables were negligibly correlated in the cases of Jordan and Morocco. 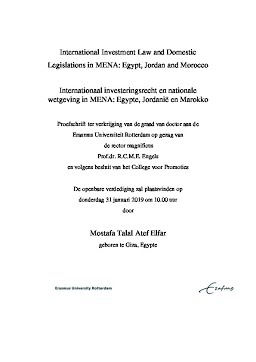