Preeclampsia and the Development and Programming of Maternal and Newborn Tissues : Clinical and Epigenetic Studies

Evidence is accumulating that mothers and offspring exposed to pregnancies complicated by preeclampsia (PE) have an enhanced risk to develop cardiovascular disease in later life. According to the moment of disease-onset, two main disease entities have been identified, with early-onset PE (EOPE) as the more severe phenotype, diagnosed before 34 weeks of gestation and late-onset PE (LOPE) diagnosed at or after 34 weeks of gestation.

The adverse prenatal PE environment, characterized by intrauterine exposure to excessive oxidative stress, may disturb the development and programming of placental and newborn cardiovascular tissues, resulting in a cardiovascular phenotype of the newborn that is more susceptible to develop future cardiovascular diseases. The process of developmental programming is strongly mediated by various epigenetic mechanisms, such as DNA methylation.

The majority of data described in this thesis was obtained from a nested case-control study embedded in The Rotterdam Periconceptional Cohort, a prospective hospital-based cohort study.

In conclusion, this thesis provides evidence for associations between prenatal exposure to particularly EOPE and a disturbed development and epigenetic programming of placental and newborn cardiovascular tissues, as potentially underlying mechanism for the association with future cardiovascular risk in offspring. 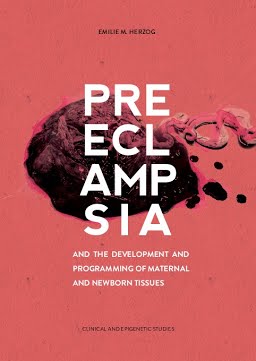