STUDY QUESTION: Do cumulative live birth rates (CLBRs) over multiple IVF/ICSI cycles confirm the low prognosis in women stratified according to the POSEIDON criteria? SUMMARY ANSWER: The CLBR of low-prognosis women is ~56% over 18 months of IVF/ICSI treatment and varies between the POSEIDON groups, which is primarily attributable to the impact of female age. WHAT IS KNOWN ALREADY: The POSEIDON group recently proposed a new stratification for low-prognosis women in IVF/ICSI treatment, with the aim to define more homogenous populations for clinical trials and stimulate a patient-tailored therapeutic approach. These new criteria combine qualitative and quantitative parameters to create four groups of low-prognosis women with supposedly similar biologic characteristics. STUDY DESIGN, SIZE, DURATION: This study analyzed the data of a Dutch multicenter observational cohort study including 551 low-prognosis women, aged <44 years, who initiated IVF/ICSI treatment between 2011 and 2014 and were treated with a fixed FSH dose of 150 IU/day in the first treatment cycle. PARTICIPANTS/MATERIALS, SETTING, METHODS: Low-prognosis women were categorized into one of the POSEIDON groups based on their age (younger or older than 35 years), anti-Müllerian hormone (AMH) level (above or below 0.96 ng/ml), and the ovarian response (poor or suboptimal) in their first cycle of standard stimulation. The primary outcome was the CLBR over multiple complete IVF/ICSI cycles, including all subsequent fresh and frozen-thawed embryo transfers, within 18 months of treatment. Cumulative incidence curves were obtained using an optimistic and a conservative analytic approach. MAIN RESULTS AND THE ROLE OF CHANCE: The CLBR of the low-prognosis women was on average ~56% over 18 months of IVF/ICSI treatment. Younger unexpected poor (n = 38) and suboptimal (n = 179) responders had a CLBR of ~65% and ~68%, respectively, and younger expected poor responders (n = 65) had a CLBR of ~59%. The CLBR of older unexpected poor (n = 41) and suboptimal responders (n = 102) was ~42% and ~54%, respectively, and of older expected poor responders (n = 126) ~39%. For comparison, the CLBR of younger (n = 164) and older (n = 78) normal responders with an adequate ovarian reserve was ~72% and ~58% over 18 months of treatment, respectively. No large differences were observed in the number of fresh treatment cycles between the POSEIDON groups, with an average of two fresh cycles per woman within 18 months of follow-up. LIMITATIONS, REASONS FOR CAUTION: Small numbers in some (sub)groups reduced the precision of the estimates. However, our findings provide the first relevant indication of the CLBR of low-prognosis women in the POSEIDON groups. Small FSH dose adjustments between cycles were allowed, inducing therapeutic disparity. Yet, this is in accordance with current daily practice and increases the generalizability of our findings. WIDER IMPLICATIONS OF THE FINDINGS: The CLBRs vary between the POSEIDON groups. This heterogeneity is primarily determined by a woman's age, reflecting the importance of oocyte quality. In younger women, current IVF/ICSI treatment reaches relatively high CLBR over multiple complete cycles, despite reduced quantitative parameters. In older women, the CLBR remains relatively low over multiple complete cycles, due to the co-occurring decline in quantitative and qualitative parameters. As no effective interventions exist to counteract this decline, clinical management currently relies on proper counselling. STUDY FUNDING/COMPETING INTEREST(S): No external funds were obtained for this study. J.A.L. is supported by a Research Fellowship grant and received an unrestricted personal grant from Merck BV. S.C.O., T.C.v.T., and H.L.T. received an unrestricted personal grant from Merck BV. C.B.L. received research grants from Merck, Ferring, and Guerbet. K.F. received unrestricted research grants from Merck Serono, Ferring, and GoodLife. She also received fees for lectures and consultancy from Ferring and GoodLife. A.H. declares that the Department of Obstetrics and Gynaecology, University Medical Centre Groningen received an unrestricted research grant from Ferring Pharmaceuticals BV, the Netherlands. J.S.E.L. has received unrestricted research grants from Ferring, Zon-MW, and The Dutch Heart Association. He also received travel grants and consultancy fees from Danone, Euroscreen, Ferring, AnshLabs, and Titus Healthcare. B.W.J.M. is supported by an National Health and Medical Research Council Practitioner Fellowship (GNT1082548) and reports consultancy work for ObsEva, Merck, and Guerbet. He also received a research grant from Merck BV and travel support from Guerbet. F.J.M.B. received monetary compensation as a member of the external advisory board for Merck Serono (the Netherlands) and Ferring Pharmaceuticals BV (the Netherlands) for advisory work for Gedeon Richter (Belgium) and Roche Diagnostics on automated AMH assay development, and for a research cooperation with Ansh Labs (USA). All other authors have nothing to declare. TRIAL REGISTRATION NUMBER: Not applicable. 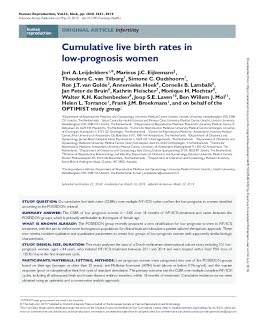