Increasing numbers of children undergo ambulatory surgery each year and a significant proportion experiences substantial preoperative anxiety and postoperative pain. The management of perioperative anxiety and pain remains challenging in children and is inadequate, which negatively impacts physical, psychosocial, and economic outcomes. Existing non-pharmacological interventions are costly, time consuming, vary in availability, and lack benefits. Therefore, there is a need for an evidence-based, accessible, non-pharmacological intervention as an adjunct to existing pharmacological alternatives to reduce perioperative anxiety and pain in children undergoing ambulatory surgery. Technology-enabled interventions have been proposed as a method to address the unmet need in this setting. In particular, serious games for health (SGHs) hold unique potential to change health beliefs and behaviors in children.

The objective of this research was to describe the rationale, scientific evidence, design aspects, and features of CliniPup, an SGH aimed at reducing perioperative anxiety and pain in children undergoing ambulatory surgery.

The SERES framework for SGH development was used to create the SGH, CliniPup. In particular, a mixed-methods approach was applied that consisted of a structured literature review supplemented with ethnographic research, such as expert interviews and a time-motion exercise. The resulting scientific evidence base was leveraged to ensure that the resulting SGH was relevant, realistic, and theory-driven. A participatory design approach was applied wherein clinical experts qualitatively reviewed several versions of the SGH and an iterative creative process was used to integrate the applicable feedback.

CliniPup, an SGH, was developed to incorporate (1) scientific evidence base from a structured literature review, (2) realistic content collected during ethnographic research such as expert interviews, (3) explicit pedagogical objectives from scientific literature, and (4) game mechanics and user interface design that address key aspects of the evidence.

This report details the systematic development of CliniPup, an SGH aimed at reducing perioperative anxiety and pain in children undergoing ambulatory surgery. Clinical experts validated CliniPup’s underlying scientific evidence base and design foundations, suggesting that it was well designed for preliminary evaluation in the target population. An evaluation plan is proposed and briefly described. 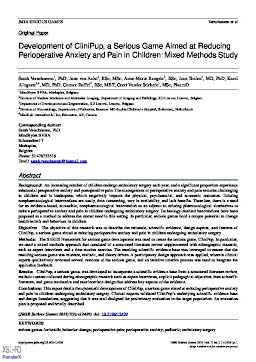