Background and Purpose— We assessed the efficacy and safety of antiplatelet agents after noncardioembolic stroke or transient ischemic attack and examined how these vary according to patients’ demographic and clinical characteristics.

Conclusions— Results favor clopidogrel and aspirin/dipyridamole combination for long-term secondary prevention after noncardioembolic stroke or transient ischemic attack, regardless of patient characteristics. Aspirin/clopidogrel combination was associated with a significantly higher risk of major bleeding compared with other antiplatelet regimens. 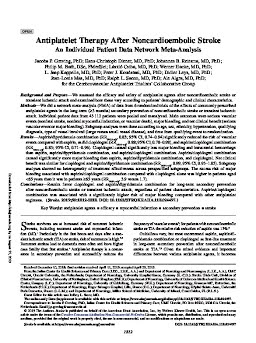