Background: Spontaneous breathing is essential for successful non-invasive respiratory support delivered by a facemask at birth. As hypoxia is a potent inhibitor of spontaneous breathing, initiating respiratory support with a high fraction of inspired O2 may reduce the risk of hypoxia and increase respiratory effort at birth. Methods: Preterm rabbit kittens (29 days gestation, term ~32 days) were delivered and randomized to receive continuous positive airway pressure with either 21% (n = 12) or 100% O2 (n = 8) via a facemask. If apnea occurred, intermittent positive pressure ventilation (iPPV) was applied with either 21% or 100% O2 in kittens who started in 21% O2, and remained at 100% O2 for kittens who started the experiment in 100% O2. Respiratory rate (breaths per minute, bpm) and variability in inter-breath interval (%) were measured from esophageal pressure recordings and functional residual capacity (FRC) was measured from synchrotron phase-contrast X-ray images. Results: Initially, kittens receiving 21% O2 had a significantly lower respiratory rate and higher variability in inter-breath interval, indicating a less stable breathing pattern than kittens starting in 100% O2 [median (IQR) respiratory rate: 16 (4–28) vs. 38 (29–46) bpm, p = 0.001; variability in inter-breath interval: 33.3% (17.2–50.1%) vs. 27.5% (18.6–36.3%), p = 0.009]. Apnea that required iPPV, was more frequently observed in kittens in whom resuscitation was started with 21% compared to 100% O2 (11/12 vs. 1/8, p = 0.001). After recovering from apnea, respiratory rate was significantly lower and variability in inter-breath interval was significantly higher in kittens who received iPPV with 21% compared to 100% O2. FRC was not different between study groups at both timepoints. Conclusion: Initiating resuscitation with 100% O2 resulted in increased respiratory activity and stability, thereby reducing the risk of apnea and need for iPPV after birth. Further studies in human preterm infants are mandatory to confirm the benefit of this approach in terms of oxygenation. In addition, the ability to avoid hyperoxia after initiation of resuscitation with 100% oxygen, using a titration protocol based on oxygen saturation, needs to be clarified. 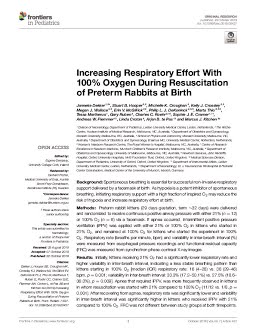