A Critical Evaluation of the Flying Geese Paradigm: the evolving framework of the model and its application to East Asian regional development and beyond

The Flying Geese (FG) began with the original model in the 1930s delineating the catch-up process of a singular late industrializer, namely Japan, from the late 19th century, and has since evolved into a prototype development framework of collective catch-up process of national economies as a regional group (such as East Asia). It has also evolved as an intellectual guideline that early industrializers may deploy in their diplomatic discourse with late industrializers. This Asian model underlines the generally positive nature of Centre-Periphery interplay, which is in clear contrast with critical perspectives of the Latin American structuralist school. This dissertation addresses the FG paradigm by reconstructing its intellectual lineage by undertaking some primary archival research (in Japanese) from the prewar period, together with an extensive literature review of major scholastic works in the postwar period, particularly after the 1960s on the East Asian development performance. The thesis highlights how the evolutionary process has transformed many parts of the model, and critically discusses various conceptual problems associated with different versions of the model.
The rise (and fall) of the model’s appeal, particularly as a regional development model for East Asia (and beyond), has been attributable to the varying degrees of intensity and zeal with which its proponents have advocated the model. The model has gone through a “subsided period” twice, first, after Japan’s defeat in World War II (WWII) (until the early 1960s), and second, after the burst of the country’s financial bubble in the early 1990s (until the 2000s). After each hiatus, nonetheless, the model has revived. The first revival (from the 1960s to the early 1990s) may be attributed to Japanese researchers and policy-makers dealing with Japan’s industrial reforms in the context of East Asian development, and the second revival (from the 2000s to the present) to new researchers on China’s industrialization and development diplomacy. The change of the FG proponents has also affected some aspects of the model, while keeping some of its core elements intact.
The analysis in this thesis compares and contrasts the Japan-centric model and the China-centric model. It argues that whereas the Japan-centric model dealt with the national (domestic) and regional (East Asian) development processes in a sequential fashion, the China-centric model now deals with two processes in a very compressed fashion. In fact, the contemporary model admits the simultaneous occurrence of the “internal” industrial diffusion within China and the conventional “external” (cross-border) industrial diffusion. Furthermore, China’s overall development trajectory encompasses a much wider area than East Asia, as its need for large external resources and markets for its own development has obliged this emerging economy to widen the scope of its foreign economic policy. The geographical sphere to which the FG paradigm applies under China’s initiative is fluid, and certainly much greater than East Asia.
As far as the functional validity of the FG paradigm for East Asia is concerned, the emergence of China in the dynamic context of the region (and beyond) is a mixed blessing. This is because the sustained function of the model depends, most importantly, on the existence of a hierarchy of development achievement – or technology gap – among constituent regional economies. Here, a major fear is “flattening” of the regional hierarchy, either due to the very slow pace of industrial upgrading of leaders (most notably Japan but the 1st-tier NIEs as well) or due to the very rapid catch-up of followers (most of all China), may frustrate the presumed “orderly” industrial upgrading of the region. Certainly, the rapid expansion of China’s economic performance contains the danger of “middle-income trap” for some East Asian economies, particularly the 2nd-tier NIEs, which may suffer from “premature deindustrialization”. 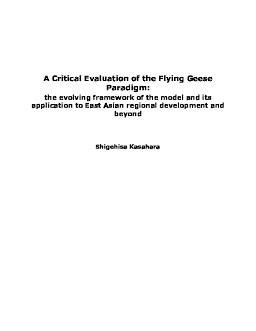