The Public Sphere in China

Beginnings of a Confucian Public Sphere

In his 1993 article The Civil Society and Public Sphere Debate: Western Reflections on Chinese Political Culture, Frederic Wakeman writes: For Habermas, as for Marx, the emergence of civil society and its attendant public sphere was inextricably connected to the emergence of the bourgeoisie. That linkage alone fixes both ideal types in a particular historical setting; and if we allow ourselves to be hobbled by teleology, then neither concept is going to fit the Chinese case very well. But as terms of social practice, which can be gingerly universalized, civil society and public sphere may afford a better understanding of recent events in China (p. 112). The 'recent events' Wakeman writes about are the 1978 Beijing Spring and the 1989 Tiananmen Square protests. The Beijing Spring lasted until 1979 and was a brief period of political liberalization during which there was greater freedom of speech in China. This freedom was used by the people to voice strong criticisms of the Cultural Revolution (1966-1976), a disastrous period in Chinese history during which the Communist Party claimed to remove all bourgeois elements from its ranks. The Cultural Revolution resulted in millions of deaths and completely halted economic growth. During the 1989 Tiananmen Square protests, students occupied Tiananmen Square in central Beijing for one and a half month, starting April 15. They finally had enough of the corruption of the Chinese Communist Party and demanded further liberalization of the country's political structure, drawing their inspiration partly from the Beijing Spring. The students failed to have their demands met. On June 4, the protests turned deadly when the government ordered a crackdown, causing an unknown number of deaths.1 If Wakeman were to rewrite his article today, he would undoubtedly take a keen interest in the case of the Umbrella Movement in Hong Kong. This city became Chinese territory only in 1997, after the socalled handover had transferred sovereignty from the United Kingdom to China. That Hong Kong enjoys a high degree of autonomy is the result of the Sino-British Joint Declaration, ratified at the United Nations in 1985, which guarantees Hong Kong's basic freedoms, including the freedom of speech, freedom of press and the right to assembly, to remain in place until 2047. When the Chinese government announced it wants to screen candidates that can run for the office of Chief Executive (the Special Administrative Region's highest political post), many people in Hong Kong felt it had gone too far. They regarded the Chinese government's decision as a means to ensure no progressive democrat could become Chief Executive. In the final quarter of 2014, students gathered in Admiralty, on Hong Kong Island, to demonstrate against the decision (Iyengar, 2014). This particular student protest did not fare well either. On September 28, the police fired tear gas into the protesting crowds to disperse them. This caused even more people to come out and support the students (Branigan & Kaiman, 2014). The resulting occupation of the area around the Central Government Complex in Admiralty, as well as Causeway Bay and Mong Kok (the city's major shopping areas and tourist spots), lasted for more than two months, after which most of the protesters stopped resisting and their camps were cleared by the police. Similar to the students of Tiananmen Square, the students of Hong Kong had none of their demands met (Phillips & Ng, 2014). At the same time, though, Hong Kong managed to show its leaders and the rest of the world that it has a vibrant public sphere that is to be reckoned with. 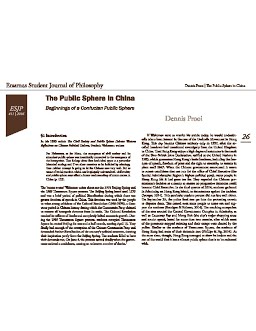