Towards a Paradigm beyond the Homo Economicus

The liberal tradition, in its broadest sense, has had a prominent role in shaping Western society as we know it today. Most notably, liberalism has been a central force in the liberation of countries and their citizens from aristocratic feudalism as well as political and religious paternalism. Furthermore, liberalism, especially through its moral foundations, has shaped our perspective on individuals as free, autonomous, and equal beings. The first liberals were those in search of a new order after the chaotic times of early industrial capitalism and three late 18th century political revolutions— the American, Dutch, and French—that had turned society and politics upside down. Central to these developments were principles of freedom of conscience and religion, freedom of thought and speech, the division of governmental powers, and rights of private property and economic freedom (Starr, 2007). The leading figures in the development of these principles were, among others, John Locke, Charles de Montesquieu, Alexis de Tocqueville, and John Stuart Mill. Based on the thoughts, principles, and moral convictions of these leading figures, notions like the rule of law and the free market developed, resulting in a metamorphosis of Western society from a deeply religious, feudal, and unequal society, to one with a secular, liberal democracy in which personal rights and liberties are upheld and protected by the state and its institutions. These rights and liberties that protect individuals from unsolicited interference with their private lives and property created a stable basis for economic progress. This is not to claim, however, that liberal thought has been completely consistent and unambiguous throughout different regions or time periods. Despite the lack of unanimity among liberals, Fawcett (2014) identifies four broad ideas that served as a foundation for liberalism and reoccurred throughout the history of liberal thought: the acknowledgement of inescapable ethical and material conflict within society, distrust of power, faith in human progress, and unconditional respect for individuals. Thus, even though there is no canonical version of liberalism itself, these four ideas indicate that liberalism in general can be regarded as the search for an “ethically acceptable order of human progress among civic equals without recourse to undue power” (ibid., p. xv). Rooted in moral convictions of equality and freedom, the purpose of liberalism, therefore, is to create the conditions for a society in which each citizen can realise his or her aims without unsolicited interference, and fully develop his or her capacities to the benefit of society. 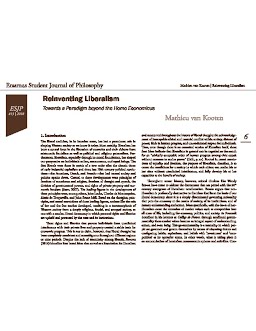