Roadblocks and Facilitators of Reprogramming to Pluripotency

A pluripotent stem cell represents one of the earliest stages of development of an embryo, when choices for intra-embryonic lineages are yet to be made. During development, cells become restricted to their lineage and eventually cell type. However, genetic information for the pluripotent state remains in place and is occasionally reactivated unintentionally, with factors such as c-Myc contributing to cancer formation. The pluripotent state can be induced by reactivating pluripotent stem cell factors experimentally. A couple of years before work on this thesis started, a relatively simple and highly reproducible technique was discovered to derive induced pluripotent stem cells (iPSCs) by overexpression of transcription factors Oct4, Sox2, Klf4 and c-Myc (OKSM). In this thesis, we used somatic cell reprogramming as a model to identify enhancers and inhibitors of reprogramming. The ‘reprogrammable mouse’ model aides reprogramming experiments by allowing exogenous factor expression without transfection of viral vectors or other methods that may add to interexperimental variation. Cell lines from this mouse contain a doxycycline-inducible polycistronic cassette with the OKSM cDNAs, as well as an endogenous Oct4-driven fluorescent (GFP) reporter.
Reprogramming to iPSC takes 8-12 days in most protocols, during which cells pass through distinct molecular states. Transcriptional analysis as well as analysis of epigenetic marks identifies which genes and loci are activated, inactivated, or transiently regulated during reprogramming. Embryonic Ras (ERas) was identified as a strong enhancer in a gain-of-function screen for enhancers of reprogramming and is upregulated during reprogramming based on transcriptional data. Although a molecular roadmap of reprogramming can be drawn, the response of individual cells to reprogramming cues is heterogeneous and in general low efficiencies are achieved. This complicates large scale screens. However, a genome-wide loss-of-function screen was successful by using a serial-enrichment approach. Sumo2 and Nudt21 were identified as inhibitors of reprogramming whose downregulation markedly increases reprogramming efficiency. Inhibition of Sumo2 or Nudt21 enhanced reprogramming speed even in high-efficiency protocols using small molecule inhibitors such as DOT1l inhibitor and the ascorbic acid/ GSK3b inhibitor combination, leading to iPSCs formed after just 38-48 hours of OKSM expression. Also, reprogramming without oncogene c-Myc was greatly enhanced. Derived iPSCs proved to be pluripotent in teratoma formation assays and chimera contribution assays. Also human reprogramming was enhanced by Sumo2 downregulation. Transcriptional analysis showed an upregulation of pluripotency associated factors in reprogramming cells with downregulated Sumo2 or Nudt21 but did not point to specific responsible downstream regulators. SUMO2 is a small peptide which can be conjugated to target proteins in a process called ‘sumoylation’, which is molecularly similar to ubiquitination. Based on literature, many cellular processes are affected by sumoylation, including epigenetic regulators of cell fate and proliferation. Nudt21 encodes for CPSF5, involved in regulation of the length of the 3’UTR of messenger RNAs. Analysis of ‘alternative polyadenylation’ of 3’UTRs transcriptome-wide shows that multiple sites can be used to cleave the pre-mRNA and start the poly-A tail; modulating translational regulation by 3’UTR binding miRNAs and RNA binding proteins. In this thesis, we show that Nudt21 downregulation causes alternative polyadenylation, including stem cell factor Wdr5, pointing to the likely mechanism of the reprogramming phenotype.
Questions of cell fate changes beyond the stem cell field can be found in oncology. Oncogenic mutations in the isocitrate dehydrogenase enzymes (mIDH), important in e.g. the citric acid cycle, occur in glioblastoma multiforme, leukemia and cholangiocarcinoma, amongst others cancer types. Mutant IDH was previously shown to induce an undifferentiated state in leukemic cells. This thesis provides evidence that expression of mIDH in reprogramming cells causes a loss of differentiation markers but not a gain of pluripotency. Analysis of the metabolome of these cells suggests possible metabolic mechanisms. Moreover, a mechanism of inhibiting α-KG dependent epigenetic regulators was suggested in experiments with the enzyme co-factor ascorbic acid (vitamin C).
Finally, a new reprogramming method was presented during work on this thesis. Efforts to reproduce the method were unsuccessful, regardless of the protocol used and assistance from the laboratory behind the findings. In a collaboration between seven stem cell laboratories, the irreproducibility and faults in the supporting data were identified. 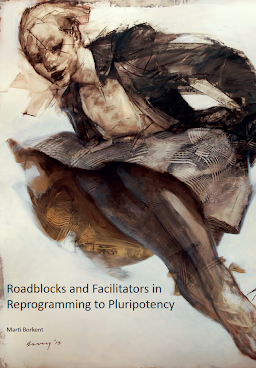