The work of economist and philosopher Amartya Sen (1933-) has attracted attention in other fields too, including in political science, human geography, planning, health and social policy, and, to a lesser but growing extent, in sociology and occasionally anthropology. This paper, written as part of a project on Indian social theorists, discusses Sen’s relation to social theorizing. While he is not a ‘social theorist’ in the sense recognized in sociology and anthropology, being grounded instead in the earlier perspectives of Adam Smith, Condorcet and J.S. Mill, much of his work, both theoretical and empirical, proves of interest to a wide range of social scientists. The paper’s first main part outlines his contributions as a social analyst, under four connected headings: (1) theorization on how people reason as agents within society; (2) ‘entitlements analysis’ of the social determinants of people’s access or lack of access to goods; (3) theorizing the effective freedoms and agency that people enjoy or lack, in his ‘capability approach’ (CA); (4) treatments of societal membership, identity and political life, including a liberal theory of personal identity and a strong advocacy of and high expectations for ‘voice’ and deliberative democracy. The second part characterizes Sen’s intellectual style, marked by systematic conceptual refinement, associated emphases on complexity, heterogeneity, and individuality, including personal individuality, and a reformist optimism. The third part treats his relation to ‘social theory’ as considered by sociologists, including the connections, contributions and possible blind spots: in his attention to work by sociologists, in his system for theorizing human action in society, in treatment of power structures and capitalism, and in his optimistic programmatic conception of personhood that stresses the freedom to make a reasoned composition of personal identity. The final substantial part discusses his preoccupation with public reasoning and democracy, and the focus on an arguably idealized version of the former and relative neglect of the sociology of the latter. It contrasts the ideal of a reasoning polity with features and trends in independent India. Nevertheless, Sen’s programmes or critical autonomy in personhood and for reasoned politics carry significant normative force, and his analytical formats can help not only structured evaluation but investigation of obstacles to more widespread agency, voice and democratic participation. 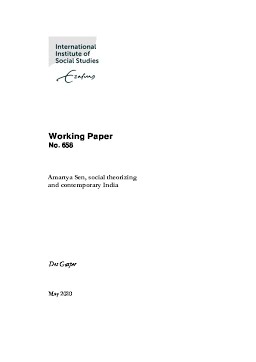