Ninety percent of the people added to the planet over the next 30 years will live in African and Asian cities, and a large portion of these populations will reside in deprived neighborhoods defined by slum conditions, informal settlement, or inadequate housing. The four current approaches to neighborhood deprivation mapping are largely siloed, and each fall short of producing accurate, timely, and comparable maps that reflect local contexts. The first approach, classifying "slum households" in census and survey data, reflects household-level rather than neighborhood-level deprivation. The second approach, field-based mapping, can produce the most accurate and context-relevant maps for a given neighborhood, however it requires substantial resources, preventing up-scaling. The third and fourth approaches, human (visual) interpretation and machine classification of air or spaceborne imagery, both overemphasize informal settlements, and fail to represent key social characteristics of deprived areas such as lack of tenure, exposure to pollution, and lack of public services. We summarize common areas of understanding, and present a set of requirements and a framework to produce routine, accurate maps of deprived urban areas that can be used by local-to-international stakeholders for advocacy, planning, and decision-making across Low-and Middle-Income Countries (LMICs). We suggest that machine learning models be extended to incorporate social area-level covariates and regular contributions of up-to-date and context-relevant field-based classification of deprived urban areas. 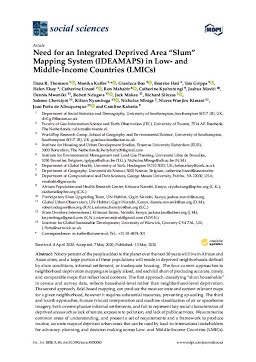