Background: Using appropriate health state utility values (HSUVs) is critical for economic evaluation of new lung cancer interventions, such as low-dose computed tomography screening and immunotherapy. Therefore, we provide a systematic review and meta-analysis of community- and choice-based HSUVs for lung cancer. Methods: On 6 March 2017, we conducted a systematic search of the following databases: Embase, Ovid MEDLINE, Web of Science, Cochrane CENTRAL, Google Scholar, and the School of Health and Related Research Health Utility Database. The search was updated on 17 April 2019. Studies reporting mean or median lung cancer-specific HSUVs including a measure of variance were included and assessed for relevance and validity. Studies with high relevance (i.e. community- and choice-based) were further analysed. Mean HSUVs were pooled using random-effects models for all stages, stages I–II, and stages III–IV. For studies with a control group, we calculated the disutility due to lung cancer. A sensitivity analysis included only the methodologically most comparable studies (i.e. using the EQ-5D instrument and matching tariff). Subgroup analyses were conducted by time to death, histology, sex, age, treatment modality, treatment line, and progression status. Results: We identified and analysed 27 studies of high relevance. The pooled HSUV was 0.68 (95% confidence interval [CI] 0.61–0.75) for all stages, 0.78 (95% CI 0.70–0.86) for stages I–II, and 0.69 (95% CI 0.65–0.73) for stages III–IV (p = 0.02 vs. stage I–II). Heterogeneity was present in each pooled analysis (p < 0.01; I2 = 92–99%). Disutility due to lung cancer ranged from 0.11 (95% CI 0.05–0.17) to 0.27 (95% CI 0.18–0.36). In the sensitivity analysis with the methodologically most comparable studies, stage-specific HSUVs varied by country. Such studies were only identified for Canada, China, Spain, the UK, the USA, Denmark, Germany, and Thailand. In the subgroup analysis by time to death, HSUVs for metastatic non-small-cell lung cancer ranged from 0.83 (95% CI 0.82–0.85) at ≥ 360 days from death to 0.56 (95% CI 0.46–0.66) at < 30 days from death. Among patients with metastatic non-small-cell lung cancer, HSUVs were lower for those receiving third- or fourth-line treatment and for those with progressed disease. Results of subgroup analyses by histology, sex, age, and treatment modality were ambiguous. Conclusions: The presented evidence supports the use of stage- and country-specific HSUVs. However, such HSUVs are unavailable for most countries. Therefore, our pooled HSUVs may provide the best available stage-specific HSUVs for most countries. For metastatic non-small-cell lung cancer, adjusting for the decreased HSUVs in the last year of life may be considered, as may further stratification of HSUVs by treatment line or progression status. If required, HSUVs for other health states may be identified using our comprehensive breakdown of study characteristics. 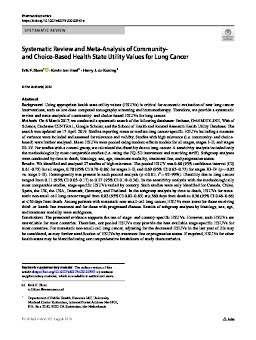