Horizons of Possibility and Meaning

This is the corrected second eBook edition of this work. Readers are asked to use this edition.

The Critique of Impure Reason has now also been published in a printed edition. To reduce the otherwise high price of this scholarly/technical book of nearly 900 pages and make it more widely available beyond university libraries to individual readers, the non-profit publisher and the author have agreed to issue the printed edition at cost.

The printed edition was released on September 1, 2021 and is now available through all booksellers, including Barnes & Noble, Amazon, and brick-and-mortar bookstores under the following ISBN: 978-0-578-88646-6.

Commendations of this work, from the back cover of the published edition:

“I admire its range of philosophical vision.” – Nicholas Rescher, Distinguished University Professor of Philosophy, University of Pittsburgh, author of more than 100 books.

“Bartlett’s Critique of Impure Reason is an impressive, bold, and ambitious work. Careful scholarship is balanced by original analyses that lead the reader to recognize the limits of meaning, knowledge, and conceptual possibility. The work addresses a host of traditional philosophical problems, among them the nature of space, time, causality, consciousness, the self, other minds, ontology, free will and determinism, and others. The book culminates in a fascinating and profound new understanding of relativity physics and quantum theory.” – Gerhard Preyer, Professor of Philosophy, Goethe-University, Frankfurt am Main, Germany, author of many books including Concepts of Meaning, Beyond Semantics and Pragmatics, Intention and Practical Thought, and Contextualism in Philosophy.

“[This work’s] goal is of a unique and difficult species: Dr. Bartlett seeks to develop a formal logical calculus on the basis of transcendental philosophical arguments; in fact, he hopes that this calculus will be the formal expression of the transcendental foundation of knowledge.... I consider Dr. Bartlett’s work soundly conceived and executed with great skill.” – C. F. von Weizsäcker, philosopher and physicist, former Director, Max-Planck-Institute, Starnberg, Germany.

“Bartlett has written an American “Prolegomena to All Future Metaphysics.” He aims rigorously to eliminate meaningless assertions, reach bedrock, and place philosophy on a firm foundation that will enable it, like science and mathematics, to produce lasting results that generations to come can build on. This is a great book, the fruit of a lifetime of research and reflection, and it deserves serious attention.” — Martin X. Moleski, former Professor, Canisius College, Buffalo, NY, studies of scientific method, the presuppositions of thought, and the self-referential nature of epistemology.

“Bartlett has written a book on what might be called the underpinnings of philosophy. It has fascinating depth and breadth, and is all the more striking due to its unifying perspective based on the concepts of reference and self-reference.” – Don Perlis, Professor of Computer Science, University of Maryland, author of numerous publications on self-adjusting autonomous systems and philosophical issues concerning self-reference, mind, and consciousness.

This is a book about the boundaries of frameworks and about the unrecognized conceptual confusions in which we become entangled when we attempt to transgress beyond the limits of the possible and meaningful. We tend either not to recognize or not to accept that we all-too-often attempt to trespass beyond the boundaries of the frameworks that make knowledge possible and the world meaningful.

The Critique of Impure Reason proposes a bold, ground-breaking, and startling thesis: that a great many of the major philosophical problems of the past can be solved through the recognition of a viciously deceptive form of thinking to which philosophers as well as non-philosophers commonly fall victim. For the first time, the book advances and justifies the criticism that a substantial number of the questions that have occupied philosophers fall into the category of “impure reason,” violating the very conditions of their possible meaningfulness.

The purpose of the study is twofold: first, to enable us to recognize the boundaries of what is referentially forbidden—the limits beyond which reference becomes meaningless—and second, to avoid falling victims to a certain broad class of conceptual confusions that lie at the heart of many major philosophical problems. As a consequence, the boundaries of possible meaning are determined.

Bartlett, the author or editor of more than 20 books, is responsible for identifying this widespread and delusion-inducing variety of error, metalogical projection. It is a previously unrecognized and insidious form of erroneous thinking that undermines its own possibility of meaning. It comes about as a result of the pervasive human compulsion to seek to transcend the limits of possible reference and meaning.

Based on original research and rigorous analysis combined with extensive scholarship, the Critique of Impure Reason develops a self-validating method that makes it possible to recognize, correct, and eliminate this major and pervasive form of fallacious thinking. In so doing, the book provides at last provable and constructive solutions to a wide range of major philosophical problems. 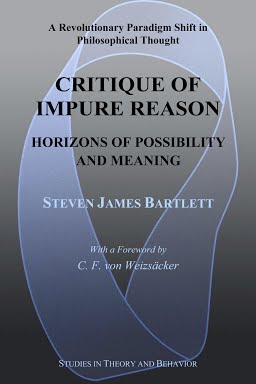