A metatranscriptomic, phylogenetic, and epidemiological study

In April 2019, a suspect cluster of enterovirus cases was reported in a neonatology department in Guangdong, China, resulting in five deaths. We aimed to investigate the pathogen profiles in fatal cases, the circulation and transmission pattern of the viruses by combining metatranscriptomic, phylogenetic, and epidemiological analyses. Metatranscriptomic sequencing was used to characterize the enteroviruses. Clinical and environmental surveillance in the local population was performed to understand the prevalence and genetic diversity of the viruses in the local population. The possible source(s), evolution, transmission, and recombination of the viruses were investigated by incorporating genomes from the current outbreak, from local retrospective surveillance, and from public databases. Metatranscriptomic analysis identified Echovirus 11 (E11) in three fatal cases. Seroprevalence of neutralization antibody to E11 was 35 to 44 per cent in 3–15 age groups of general population, and the viruses were associated with various clinical symptoms. From the viral phylogeny, nosocomial transmissions were identified and all E11 2019 outbreak strains were closely related with E11 strains circulating in local population 2017–19. Frequent recombination occurred among the 2019 Guangdong E11 outbreak strains and various genotypes in enterovirus B species. This study provides an example of combining advanced genetic technology and epidemiological surveillance in pathogen diagnosis, source(s), and transmission tracing during an infectious disease outbreak. The result highlights the hidden E11 circulation and the risk of viral transmission and infection in the young age population in China. Frequent recombination between Guangdong-like strains and other enterovirus genotypes also implies the prevalence of these emerging E11 strains. 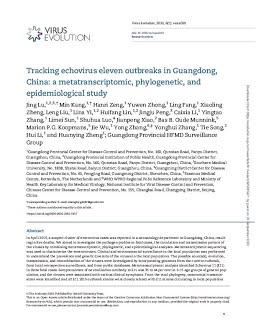