Diagnostic Microbiology probably started in the late 17th century when the Dutch scientist Antoni van Leeuwenhoek made microorganisms visible for the first time. Since then, 3 major revolutions have taken place, all of which had a major impact on the field of clinical microbiology. The first revolution took place at the end of the 19th century after the development of solid culture media by Robert Koch. Bacterial culture, nowadays, still remains the cornerstone of clinical microbiology, although technical refinements have made available automated identification and antimicrobial susceptibility testing in most modern laboratories. The second revolution was the development of antigen/antibody detection in the sixties and seventies of the 20th century. Early antigen/antibody testing tended to lack some sensitivity and specificity, a problem which is nowadays largely resolved, however, most of these tests still show a window period before detectable antigen/antibody levels appea! r in the patient. The third and final revolution, the nucleic acid (NA)-based detection of microorganisms started some 25 year ago and is still ongoing. Molecular diagnostic testing has made its way from basic research to become a permanent asset for the clinical microbiology laboratory. In fact, in clinical virology it has nearly completely replaced viral culture as the primary means to detect active viral infection. However, in other fields in clinical microbiology, the use of molecular diagnostics has remained more limited to those microorganisms that are either uncultivable or hard to culture, or those where conventional diagnostic procedures lack sensitivity. In this thesis, we set out to explore new possibilities of molecular diagnostic testing within the setting of a community-based clinical microbiology laboratory. We have shown that a universal, 16S rDNA- based, PCR approach provides a valuable supplementary test, despite the increased risk for contamination. However, when this risk is carefully managed, this testing strategy has proven its use in the diagnosis of bacterial meningitis, especially when antimicrobial t! herapy has already started. In addition, universal bacterial PCR can be applied to all clinical materials originating from human body sites considered to sterile in healthy subjects. Due to the increasing number specimens handled by the molecular diagnostic laboratory, automation of sample preparation has become mandatory. Although the literature shows acceptable performance for automated NA extractors in most applications, our research has shown that thorough evaluations of these extractors are still mandatory and extrapolation of previous results should be done with some care. Our research has addressed some of the primary clinical specimen types (i.e. blood, plasma, and cerebrospinal fluid samples), as well as one of the most difficult specimens types to be processed; feces. This has illustrated an issue with the MagNA Pure Total Nucleic Acid Isolation Kit, which may effect some clinical applications where maximal sensitivity is required. On the other hand, we have also shown that the performance of two (semi-)automated extraction platforms with stool specimens is highly satisfactory. To explore the possibilities of molecular diagnostic testing in applications where culture has long since been considered the “gold standard”, we have chosen to use the diagnosis of gastroenteritis as a model system. Classically, diagnosis of gastroenteritis focuses on bacterial culture and detection of parasites by microscopy. However, with the refinement of molecular diagnostics (i.e. automated sample preparation and real-time PCR), these methods now provide an effective alternative to conventional detection of gastrointestinal pathogens, as is illustrated for several gastrointestinal pathogens in this thesis. On the short term, we will probably see an increase in molecular diagnostic testing within the clinical microbiology laboratory. This testing will be conducted in syndrome-based detection panels. The role of culture will therefore move from a primary detection tool to a epidemiological tool. On the long run, developments will be technology driven, eventually leading to “real-time” point of care diagnostics. 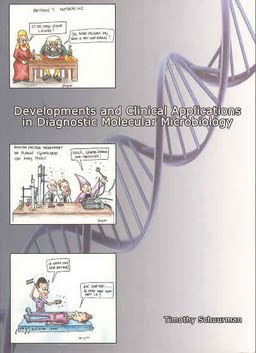