Global burden of 369 diseases and injuries in 204 countries and territories, 1990–2019: a systematic analysis for the Global Burden of Disease Study 2019

Background In an era of shifting global agendas and expanded emphasis on non-communicable diseases and injuries along with communicable diseases, sound evidence on trends by cause at the national level is essential. The Global Burden of Diseases, Injuries, and Risk Factors Study (GBD) provides a systematic scientific assessment of published, publicly available, and contributed data on incidence, prevalence, and mortality for a mutually exclusive and collectively exhaustive list of diseases and injuries. Methods GBD estimates incidence, prevalence, mortality, years of life lost (YLLs), years lived with disability (YLDs), and disability-adjusted life-years (DALYs) due to 369 diseases and injuries, for two sexes, and for 204 countries and territories. Input data were extracted from censuses, household surveys, civil registration and vital statistics, disease registries, health service use, air pollution monitors, satellite imaging, disease notifications, and other sources. Cause-specific death rates and cause fractions were calculated using the Cause of Death Ensemble model and spatiotemporal Gaussian process regression. Cause-specific deaths were adjusted to match the total all-cause deaths calculated as part of the GBD population, fertility, and mortality estimates. Deaths were multiplied by standard life expectancy at each age to calculate YLLs. A Bayesian meta-regression modelling tool, DisMod-MR 2.1, was used to ensure consistency between incidence, prevalence, remission, excess mortality, and cause-specific mortality for most causes. Prevalence estimates were multiplied by disability weights for mutually exclusive sequelae of diseases and injuries to calculate YLDs. We considered results in the context of the Socio-demographic Index (SDI), a composite indicator of income per capita, years of schooling, and fertility rate in females younger than 25 years. Uncertainty intervals (UIs) were generated for every metric using the 25th and 975th ordered 1000 draw values of the posterior distribution. Findings Global health has steadily improved over the past 30 years as measured by age-standardised DALY rates. After taking into account population growth and ageing, the absolute number of DALYs has remained stable. Since 2010, the pace of decline in global age-standardised DALY rates has accelerated in age groups younger than 50 years compared with the 1990–2010 time period, with the greatest annualised rate of decline occurring in the 0–9-year age group. Six infectious diseases were among the top ten causes of DALYs in children younger than 10 years in 2019: lower respiratory infections (ranked second), diarrhoeal diseases (third), malaria (fifth), meningitis (sixth), whooping cough (ninth), and sexually transmitted infections (which, in this age group, is fully accounted for by congenital syphilis; ranked tenth). In adolescents aged 10–24 years, three injury causes were among the top causes of DALYs: road injuries (ranked first), self-harm (third), and interpersonal violence (fifth). Five of the causes that were in the top ten for ages 10–24 years were also in the top ten in the 25–49-year age group: road injuries (ranked first), HIV/AIDS (second), low back pain (fourth), headache disorders (fifth), and depressive disorders (sixth). In 2019, ischaemic heart disease and stroke were the top-ranked causes of DALYs in both the 50–74-year and 75-years-and-older age groups. Since 1990, there has been a marked shift towards a greater proportion of burden due to YLDs from non-communicable diseases and injuries. In 2019, there were 11 countries where non-communicable disease and injury YLDs constituted more than half of all disease burden. Decreases in age-standardised DALY rates have accelerated over the past decade in countries at the lower end of the SDI range, while improvements have started to stagnate or even reverse in countries with higher SDI. Interpretation As disability becomes an increasingly large component of disease burden and a larger component of health expenditure, greater research and development investment is needed to identify new, more effective intervention strategies. With a rapidly ageing global population, the demands on health services to deal with disabling outcomes, which increase with age, will require policy makers to anticipate these changes. The mix of universal and more geographically specific influences on health reinforces the need for regular reporting on population health in detail and by underlying cause to help decision makers to identify success stories of disease control to emulate, as well as opportunities to improve. 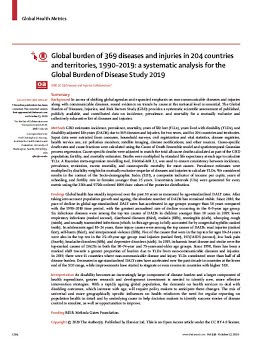