Global burden of 87 risk factors in 204 countries and territories, 1990–2019: a systematic analysis for the Global Burden of Disease Study 2019

Background Rigorous analysis of levels and trends in exposure to leading risk factors and quantification of their effect on human health are important to identify where public health is making progress and in which cases current efforts are inadequate. The Global Burden of Diseases, Injuries, and Risk Factors Study (GBD) 2019 provides a standardised and comprehensive assessment of the magnitude of risk factor exposure, relative risk, and attributable burden of disease. Methods GBD 2019 estimated attributable mortality, years of life lost (YLLs), years of life lived with disability (YLDs), and disability-adjusted life-years (DALYs) for 87 risk factors and combinations of risk factors, at the global level, regionally, and for 204 countries and territories. GBD uses a hierarchical list of risk factors so that specific risk factors (eg, sodium intake), and related aggregates (eg, diet quality), are both evaluated. This method has six analytical steps. (1) We included 560 risk–outcome pairs that met criteria for convincing or probable evidence on the basis of research studies. 12 risk–outcome pairs included in GBD 2017 no longer met inclusion criteria and 47 risk–outcome pairs for risks already included in GBD 2017 were added based on new evidence. (2) Relative risks were estimated as a function of exposure based on published systematic reviews, 81 systematic reviews done for GBD 2019, and meta-regression. (3) Levels of exposure in each age-sex-location-year included in the study were estimated based on all available data sources using spatiotemporal Gaussian process regression, DisMod-MR 2.1, a Bayesian meta-regression method, or alternative methods. (4) We determined, from published trials or cohort studies, the level of exposure associated with minimum risk, called the theoretical minimum risk exposure level. (5) Attributable deaths, YLLs, YLDs, and DALYs were computed by multiplying population attributable fractions (PAFs) by the relevant outcome quantity for each agesex-location-year. (6) PAFs and attributable burden for combinations of risk factors were estimated taking into account mediation of different risk factors through other risk factors. Across all six analytical steps, 30 652 distinct data sources were used in the analysis. Uncertainty in each step of the analysis was propagated into the final estimates of attributable burden. Exposure levels for dichotomous, polytomous, and continuous risk factors were summarised with use of the summary exposure value to facilitate comparisons over time, across location, and across risks. Because the entire time series from 1990 to 2019 has been re-estimated with use of consistent data and methods, these results supersede previously published GBD estimates of attributable burden. Findings The largest declines in risk exposure from 2010 to 2019 were among a set of risks that are strongly linked to social and economic development, including household air pollution; unsafe water, sanitation, and handwashing; and child growth failure. Global declines also occurred for tobacco smoking and lead exposure. The largest increases in risk exposure were for ambient particulate matter pollution, drug use, high fasting plasma glucose, and high bodymass index. In 2019, the leading Level 2 risk factor globally for attributable deaths was high systolic blood pressure, which accounted for 10·8 million (95% uncertainty interval [UI] 9·51–12·1) deaths (19·2% [16·9–21·3] of all deaths in 2019), followed by tobacco (smoked, second-hand, and chewing), which accounted for 8·71 million (8·12–9·31) deaths (15·4% [14·6–16·2] of all deaths in 2019). The leading Level 2 risk factor for attributable DALYs globally in 2019 was child and maternal malnutrition, which largely affects health in the youngest age groups and accounted for 295 million (253–350) DALYs (11·6% [10·3–13·1] of all global DALYs that year). The risk factor burden varied considerably in 2019 between age groups and locations. Among children aged 0–9 years, the three leading detailed risk factors for attributable DALYs were all related to malnutrition. Iron deficiency was the leading risk factor for those aged 10–24 years, alcohol use for those aged 25–49 years, and high systolic blood pressure for those aged 50–74 years and 75 years and older. Interpretation Overall, the record for reducing exposure to harmful risks over the past three decades is poor. Success with reducing smoking and lead exposure through regulatory policy might point the way for a stronger role for public policy on other risks in addition to continued efforts to provide information on risk factor harm to the general public. 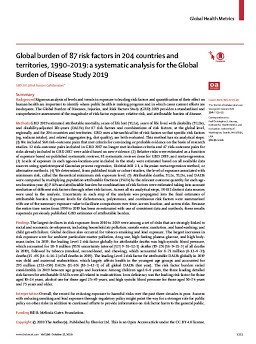