STUDY QUESTION: Does endometrial scratching in women with one failed IVF/ICSI treatment affect the chance of a live birth of the subsequent fresh IVF/ICSI cycle? SUMMARY ANSWER: In this study, 4.6% more live births were observed in the scratch group, with a likely certainty range between -0.7% and +9.9%. WHAT IS KNOWN ALREADY: Since the first suggestion that endometrial scratching might improve embryo implantation during IVF/ICSI, many clinical trials have been conducted. However, due to limitations in sample size and study quality, it remains unclear whether endometrial scratching improves IVF/ICSI outcomes. STUDY DESIGN, SIZE, DURATION: The SCRaTCH trial was a non-blinded randomised controlled trial in women with one unsuccessful IVF/ICSI cycle and assessed whether a single endometrial scratch using an endometrial biopsy catheter would lead to a higher live birth rate after the subsequent IVF/ICSI treatment compared to no scratch. The study took place in 8 academic and 24 general hospitals. Participants were randomised between January 2016 and July 2018 by a web-based randomisation programme. Secondary outcomes included cumulative 12-month ongoing pregnancy leading to live birth rate. PARTICIPANTS/MATERIALS, SETTING, METHODS: Women with one previous failed IVF/ICSI treatment and planning a second fresh IVF/ICSI treatment were eligible. In total, 933 participants out of 1065 eligibles were included (participation rate 88%). MAIN RESULTS AND THE ROLE OF CHANCE: After the fresh transfer, 4.6% more live births were observed in the scratch compared to control group (110/465 versus 88/461, respectively, risk ratio (RR) 1.24 [95% CI 0.96-1.59]). These data are consistent with a true difference of between -0.7% and +9.9% (95% CI), indicating that while the largest proportion of the 95% CI is positive, scratching could have no or even a small negative effect. Biochemical pregnancy loss and miscarriage rate did not differ between the two groups: in the scratch group 27/153 biochemical pregnancy losses and 14/126 miscarriages occurred, while this was 19/130 and 17/111 for the control group (RR 1.21 (95% CI 0.71-2.07) and RR 0.73 (95% CI 0.38-1.40), respectively). After 12 months of follow-up, 5.1% more live births were observed in the scratch group (202/467 versus 178/466), of which the true difference most likely lies between -1.2% and +11.4% (95% CI). LIMITATIONS, REASONS FOR CAUTION: This study was not blinded. Knowledge of allocation may have been an incentive for participants allocated to the scratch group to continue treatment in situations where they may otherwise have cancelled or stopped. In addition, this study was powered to detect a difference in live birth rate of 9%. WIDER IMPLICATIONS OF THE FINDINGS: The results of this study are an incentive for further assessment of the efficacy and clinical implications of endometrial scratching. If a true effect exists, it may be smaller than previously anticipated or may be limited to specific groups of women undergoing IVF/ICSI. Studying this will require larger sample sizes, which will be provided by the ongoing international individual participant data-analysis (PROSPERO CRD42017079120). At present, endometrial scratching should not be performed outside of clinical trials. STUDY FUNDING/COMPETING INTEREST(S): This study was funded by ZonMW, the Dutch organisation for funding healthcare research. J.S.E. Laven reports grants and personal fees from AnshLabs (Webster, Tx, USA), Ferring (Hoofddorp, The Netherlands) and Ministry of Health (CIBG, The Hague, The Netherlands) outside the submitted work. A.E.P. Cantineau reports 'other' from Ferring BV, personal fees from Up to date Hyperthecosis, 'other' from Theramex BV, outside the submitted work. E.R. Groenewoud reports grants from Titus Health Care during the conduct of the study. A.M. van Heusden reports personal fees from Merck Serono, personal fees from Ferring, personal fees from Goodlife, outside the submitted work. F.J.M. Broekmans reports personal fees as Member of the external advisory board for Ferring BV, The Netherlands, personal fees as Member of the external advisory board for Merck Serono, The Netherlands, personal fees as Member of the external advisory for Gedeon Richter, Belgium, personal fees from Educational activities for Ferring BV, The Netherlands, grants from Research support grant Merck Serono, grants from Research support grant Ferring, personal fees from Advisory and consultancy work Roche, outside the submitted work. C.B. Lambalk reports grants from Ferring, grants from Merck, grants from Guerbet, outside the submitted work. TRIAL REGISTRATION NUMBER: Registered in the Netherlands Trial Register (NL5193/NTR 5342). TRIAL REGISTRATION DATE: 31 July 2015. DATE OF FIRST PATIENT’S ENROLMENT: 26 January 2016. 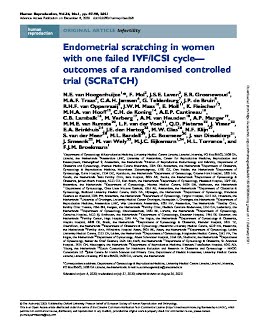