Prior to 1994, South Africa was infamous for its racialised policies and seemingly limitless measures of social control through a regime of apartheid, or racialised separation. Its unforgiving approach of previous, white-minority governments extended to mainly black foreigners, including refugees from the civil war in Mozambique from 1977–1992. After democratic elections in 1994, South Africa’s immediate post-apartheid migration regime was still largely oriented around an unreconstructed, apartheid-era approach of controlling the admission into, residence in, and departure from South Africa.

This dire situation triggered a call for reform, to which policymakers were very slow to respond. Ultimately, in its efforts to develop and implement a border management and migration framework, the South African government has heavily relied on legal frameworks, border control policies, strategies and technologies transplanted from Europe and the United States. But, despite all this investment in a precedent-based yet foreign machinery, the government still struggles with its porous borders and irregular immigration.

As a result, attempts to manage migration through policy reforms in South Africa have been fraught with challenges and contradictions. Particularly from around 2008, South Africa has not only embraced a spate of ever-more restrictive policies and laws that aim to sift out the desirable from the undesirable migrants, it has defied court judgements that have found the government to be in contravention of the law and the Constitution and obliged it to change. This has culminated in an explicitly deterrent and security-oriented approach that continues to lack effective judicial oversight.

In this Working Paper, we present a comprehensive overview of South African migration and Border Control policies over a 25-year period. In a separate paper, which builds on this thick description, we argue that South Africa’s efforts to deter immigrants has not been framed by globally-accepted principles, based on South Africa’s ratification of international treaties governing refugees and migrants in particular, but rather has continued to be a policy of rather arbitrary enforcement is a sad reflection of deep-seated governance problems that the country faces generally. 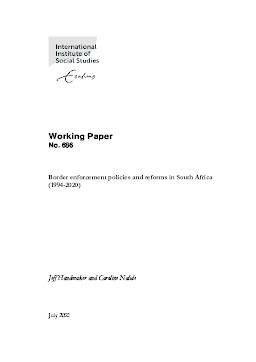