Since the introduction of molecular genetics, our knowledge about the abnormalities underlying human AML has increased tremendously. This is well reflected in the evolution that classification of the disease has undergone, from cytomorphology (according the FAB system, introduced in the 1970s) to the recognition of entities of AML defined by gene mutations (WHO classification 2008). The main goal of this thesis was to further progress the molecular dissection of AML. Special attention throughout this thesis was given to abnormalities affecting CEBPA, the gene encoding the transcription factor CCAAT/enhancer binding protein alpha, one of the master regulators of normal myeloid differentiation. To address the research questions posed in the various studies, several genome-wide research techniques were applied, with a central role for GEP. In chapter 2, we reviewed the use of genome-wide GEP in AML and described some of the common research questions that investigators have addressed using this technique, i.e. those related to class discovery, class prediction, outcome prediction and dissection of pathobiology. We also discussed limitations of the technology and we described promising future developments. Chapter 3 focused on the diagnostic potential of GEP-based class prediction of cytogenetically and genetically defined AML subgroups. These analyses indicated, in agreement with previous observations, that the chromosomal defects t(8;21), t(15;17) and inv(16) can be predicted with high accuracy, but that many other abnormalities do not result in distinctive classifiers. For CEBPA mutations, we observed two groups of AML cases: one that could be well predicted, and one that could not. This latter finding was studied in further detail in chapter 9. Together, these results confirmed that GEP can be applied in a d! iagnostic setting for AML, albeit at the moment only for a selected and defined number of subtypes. In chapters 4-6, we investigated the molecular characteristics and pathobiology of a novel subset of acute leukemia. Chapter 4 described, through mouse modeling, a novel mechanism of inhibition of C/EBPalpha causing AML, i.e. elevated expression of Trib2. Trib2 was shown to bind C/EBPalpha protein, inducing its degradation. Analysis of our previously established gene expression data base of human AML samples highlighted an association of high TRIB2 expression with a particular cluster characterized by CEBPA mutations. In contrast to the other cases in this cluster, the 6 leukemias that appeared particularly associated with high TRIB2 levels did not exhibit CEBPA mutations. Additional experiments, described in chapters 5 and 6, uncovered distinctive characteristics of these specific leukemias, including, most notably, epigenetic silencing of CEBPA expression and an overall DNA methylation profile characterized by hypermethylation. These molecular features were accompanied by! an immature, mixed myeloid/T-lymphoid immunophenotype. In chapters 7 through 9, we studied AMLs with mutations in the CEBPA gene. In chapter 7, it was found that an insertion in the second transactivation domain of C/EBPalpha (HP196-197ins) is a common polymorphism and not an AML-specific mutation. Chapter 8 described that homozygosity of CEBPA mutations is frequently associated with copy number neutral loss-of-heterozygosity of the chromosomal region that includes CEBPA, presumably through mitotic recombination. Chapter 9 presented previously unrecognized heterogeneity of CEBPA mutant AML. While it was already known that there are AMLs in which both CEBPA alleles are affected as well as AMLs with only a single heterozygous aberration, it was not known whether the reported prognostic impact of CEBPA mutations, i.e. favorable, was equal in both groups. Our analyses suggested that only AML patients with two mutations in the CEBPA gene, presumably affecting both alleles, should be considered to have favorable risk. In support of th! e prognostic differences, single and double mutant specimens also strikingly differed in genome-wide transcriptional profiles. In the final chapter, chapter 10, we identified putative novel target genes of C/EBPalpha in a myeloid cell line model using ChIP-chip. We performed similar experiments with a variant C/EBPalpha protein that carries a C-terminal insertion mutation in the bZIP region resembling human AML. Our preliminary analysis of these data demonstrated impaired DNA binding of the mutant, providing possible leads to an understanding of the mechanism involved in human leukemogenesis by the mutant protein. 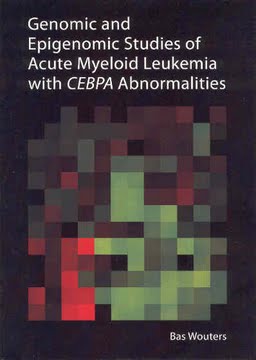