The application of somatic gene transfer as a potential treatment in human disease has progressed from speculation to reality in a short time [4,20,21,84,85,87,105,117,174]. In May 1989 the first clinical marker gene protocol took place [145], followed by the first gene therapy protocol for the correction of adenosine deaminase deficiency in September 1990 [3,111. Subsequently, the number of gene marking and gene therapy trials grew exponentially. In 1996 more than 200 clinical protocols were approved worldwide [51 and more than 1,500 patients are now enrolled in gene transfer trials (96). However, up to now the gene therapy trials have not brought clear clinical benefits for patients [5,31,51,98]. An important explanation for the lack of therapeutic effects is the very low gene transfer efficiency in human cells. One of the main targets for gene therapy is the hematopoietic system because of well-developed procedures for bone marrow transplantation, the many types and wide distribution of hematopoietic cells in the body and the existence of many diseases and treatments that affect hematopoietic cells. The target cell for gene transfer is the primitive hematopoietic stem cell (HSC), which is present at low frequency in the bone marrow, is responsible for long-term hematopoiesis and gives rise to all hematological and lymphoid lineages. Although many research groups have reported transfer and long-term expression of genes in a significant percentage of murine hematopoietic cells [77,142,177]' the achievements in larger outbred animals [81,93,150], nonhuman primates [14,164,1651 and humans [17,29,36,44,48,72,861 show only a small percentage of long-term expression in a limited number of recipients. The aim of this study was to develop protocols which improve gene transfer of human HSC. For this purpose suitable assays were developed to determine the frequency and proliferative capacity of different classes of human HSC. Subsequently, culture conditions for human HSC were studied. As a result, using newly developed human HSC assays and optimized culture conditions, improved human HSC gene transfer protocols could be proposed. In the presented studies we have opted for clinically relevant and acceptable protocols. This included the use of target cells which are most frequently used in clinical autologous stem cell transplantation, namely mobilized peripheral blood stem cells (PBSC) [1611 and serum-free transfection cultures in which target cells and virus-producing cells were separated. 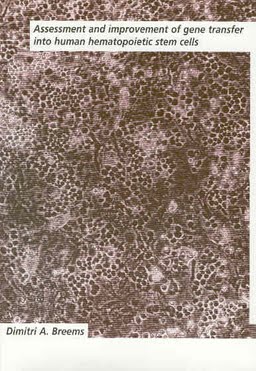