Severe Personality-Disordered Defendants and the Insanity Plea in the United States: a Proposal for Change

People who live in society are bound together by laws based on duties and rights. Even though primarily born out of acceptance and respect for one another, these laws, part of an ethical system of communal life, are also utilitarian in their essence. Though accepting the above postulates, people are at times the subject of feelings, drives, and actions contrary to respectful interaction with others. Society has, therefore, created criminal laws, codified through the centuries, with the purpose of controlling the deviant and impulsive behavior of some of its members in order to maintain, in as much as possible, societal homeostasis. Ethical principles, such as beneficence and non-maleficence, especially in a democratic society, are basic to legal systems whose purpose is to dispense justice in its various courts of law, where victims and miscreants, represented by their respective advocates, contend over guilt and exculpation. The majority of criminal cases involve mentally competent persons, who maliciously do not conform to the requirements of the law and, furthermore, often do not conform to basic moral values. A small percentage of those who break the law suffer from a severe mental disorder, which, if present at the time of a crime, may annul or greatly diminish their mental capacity to appreciate the nature, quality and consequences of their criminal behavior or their capacity to conform to the requirements of the law. These persons are allowed by the law to enter an exculpatory plea and to attempt to prove at trial that they were legally insane at the time of an alleged offense. There is, in addition, a substantial cohort of persons who suffer from a severe personality disorder for whom entering a plea of not guilty by reason of insanity in United States courts at present is typically a futile exercise, even though their behavior at the time of their alleged crime was bizarre, confused and irrational. The futility of their plea stems from the practical reality that their disorder is not recognized as a mental illness.They cannot take advantage of the insanity plea because of the prevailing legal view that they cannot meet its threshold criterion. Even if they were in a court that would allow them to surmount that hurdle, they would still be subjected to exceptionally strict scrutiny.It is the argument of this thesis that, in regard to individuals suffering from a severe personality disorder, in the United States the criminal law operates if not from unfounded prejudice certainly from a foundation that disregards current scientific knowledge. The premise underlying this argument is that persons with a severe personality disorder (many of whom are capable of only marginal functioning in daily life), under severe stress, may at times undergo a personality disintegration that is tantamount to a frank psychotic episode, which should make them eligible for an insanity plea. However, United States courts, including the United States Supreme Court, have held explicitly that criminal defendants have no due process right to 2 how the insanity defense is framed or worded, what sorts of conditions it may cover or exclude, or even whether they may have the benefit of an insanity defense at all—or any number of other exculpatory concepts. (See, e.g. Montana v. Egelhoff, 518 U.S. 37 (1996); Clark v. Arizona, 126 S. Ct. 2709 (2006)). Elementary fairness suggests they ought to be allowed to assert their non-accountability in the context of an insanity defense or any other defense. Of course, it is well known that offenders at times attempt to malinger mental disorders, or to greatly exaggerate any existing mental pathology. That is a risk that is run with any offender. However, it is better to free ten guilty people than to convict one innocent one. It serves as the justification for requiring, that is, an extraordinarily high standard of proof (beyond a reasonable doubt) in criminal prosecutions. The argument of this thesis is that the preclusion to plead insanity or the non-credibility of those rare personalitydisordered offenders who are allowed to enter the plea, is based on socio-political factors rather than psychological and psychiatric ones. 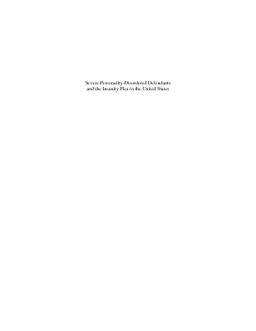