In the 1940's, an elegant and exciting new teclmique was introduced: the penetration of a delicate cell membrane, enabling the monitoring of the electrical activity of living cells. A very flne tip of a thin glass tube fllled with a conducting solution, called a microeiectrodc, was inserted into a cell, connecting the interior of the cell to the outside world. TIle idea itself originated around 1902, but the technique was not applied successfully until halfway through the 20~ century. Following the pioneering work, refmcmcllts were made and the method was used in an increasing number of laboratories. In the begullling, attention was mainly concentrated on larger cells without abundant cOIDlcctive tissue: striated muscle and neUfOlles, hut gradually, the technique was also applied to smooth muscle. With every action potential recorded, knowledge about the underlying electrophysiological processes increased, although the progress was slow. Even in 1968, the ionic basis of smooth muscle action potentials was not known, although by then it was suspected to be calcium instead of sodium, as in neurones [46]. The urinary bladder consists of a mucosal layer on the lumen side, a connective tissue layer on the outside and the detmsor, a smooth muscle layer, inM between. It is clinically relevant to unravel the mechanism behind detrusor contraction. Nonnally, urine produced in the kidneys is stored in the urinary bladder under low pressure conditions. At a convenient moment, the urine is then expelled rapidly at a high pressure, under cholinergic control. In some patients however, the detmsor spontaneously and involuntarily contracts during the storage phase. TIlis may lead to urine loss, and additionally, the rise in pressure may lead to reflux of urine to the kidneys with a possibility of kidney damage. Electrophysiology is an essential tool to uncover the physiological basis of this disorder. The detnlsor muscle has all characteristics of jeopardising successful intracellular recordings: it consists of an integrated network of muscle bundles, orientated randomly. The muscle bundles, UI tum, are formed by long, thin cells, varying from 150 to 300 ~m length, and 6 to 8 ~m in diameter. In addition, the cells are amply embedded in connective tissue. Apart from these features, which are a hindrance for impalement, the cells display constant mechanical activity, increasing the chance of dislodging the electrode from the cell, once it is impaled. Still, attempts were made and the flrst, and for a long time also the only article to be published on combined intracellular electrical and mechanical activity of urulary bladder smooth muscle origulates from 1961, describing experiments made in rabbit detrusor. 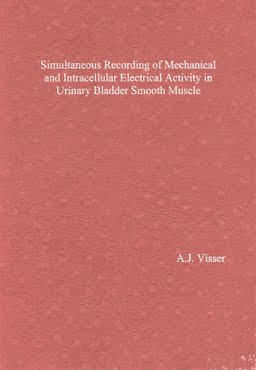