The taxanes are a new class of drugs that exert antitumor activity through a unique mechanism. As early as in the late 1960s paclitaxel, extracted from the bark of the Pacific Yew Taxus Brevifolia, was the first compound with a taxene ring that exhibited antitumor activity. Because of the difficulties in drug isolation, extraction and formulation, the development of this antitumor agent has been relatively slow. In 1986 docetaxel, the second drug in this new class of compounds, was developed. Docetaxel is synthesized from 10-deacetyl baccatin III, a noncytotoxic precursor extracted from the European Yew Taxus Baccata. Taxanes promote the polymerization of tubulin into stable microtubules and inhibit microtubule depolymerization. This leads to a disruption of the equilibrium within the microtubule system and ultimately leads to cell death. The activity of docetaxel was studied in many murine tumor models that showed that docetaxel was active against subcutaneous B16 melanoma, MX-1 mammary cancer, C38 colon carcinoma, CX-1 colon carcinoma, LX-1 lung carcinoma, P03 pancreatic carcinoma, SK MEL-2 melanoma and OVCAR,3, HOC 8, HOC 10 and HOC 22 ovarian carcinomas. In phase I studies on single agent docetaxel responses were reported in various tumor types such as breast cancer, ovarian cancer, adenocarcinoma of unknown primary, pancreatic cancer, small cell and non-small cell lung cance. The major dose limiting toxicity was an early-onset, short-lasting, dose-dependent, schedule-independent and noncumulative neutropenia. Other side effects were generally mild and consisted of alopecia, nausea, vomiting, diarrhea, mucositis, neurotoxicity, infrequent hypersensitivity reactions, fluid retention and skin- and nailtoxicity. For phase II studies the recommended dose and schedule was 100 mg/m2 given as a 1-hour infusion every 3 weeks. Phase II studies on docetaxel among others showed activity in breast cancer. non-small cell lung cancer, head and neck cancer, gastric cancer, melanoma, soft tissue sarcom), and pancreatic cancer. In view of the fact that docetaxel is effective in a variety of solid tumors, it was considered important to study the combination of the drug with other potent antitumor agents. This thesis includes phase I studies on the combination of docetaxel with cisplatin and ifosfamide, respectively. Fluid retention and neurotoxicity, occurring in relation to the cumulative docetaxel dose, are besides activity important features. At high cumulative doses of docetaxel these side effects may become severe and disabling and lead to treatment discontinuation. It is important to try to alleviate these side effects in view of the single agent use but also in view of expected increased toxicity in case of combination chemotherapy. Therefore we performed a prospective study on the incidence of neurotoxicity induced by the combination of docetaxel and cisplatin, two potentially neurotoxic drugs. Despite corticosteroid comedication fluid retention still occurs. In view of case reports suggesting amelioration of this side effect by venotonic drugs, we performed a prospective study on the venotonic drug hydroxyethylrutosiden in patients treated with docetaxel. The neurotoxicity induced by docetaxel was previously reported in studies where corticosteroid comedication was not given routinely. Although introduced to reduce docetaxel-related fluid retention, it was yet unknown if corticosteroids also had an effect on neurotoxicity. This was assessed prospectively in the last chapter. 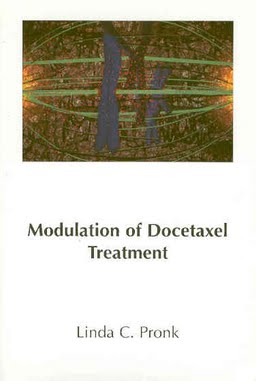