The Psychological Impact of IVF Treatment

IVF treatment requires the woman to undergo several invasive procedures, which are repeated in subsequent treatment cycles. In addition to the physical burden, the threat of treatment failure confronts the couple with the possibility that they have to give up hope to have a child of their own. In line with the psychological consequences of infertility model, women seem to experience moderate levels of negative emotions (e.g. distress) before, during and after IVF treatment. According to the cyclical model of infertility and stress, the chance of conceiving through IVF is negatively influenced by high levels of psychological distress. Surprisingly, we found that women who reported a low level of pretreatment distress were less likely to achieve term live birth than women who expressed a moderate level of distress. Still, as the majority of participating women did not meet the criteria for either clinical depression or anxiety, the results of this thesis do n! ot rule out that high patient distress leads to worse IVF outcomes than moderate distress. However, the relationship between patient distress and IVF success rates might not be as straightforward as commonly believed by researchers, clinicians and patients. It has been widely argued that people undergoing IVF should receive infertility counseling by a psychosocial counsellor to help them cope with negative emotions related to treatment and infertility. Hence, the first aim of this study was to evaluate the effect of a psychosocial counselling intervention during IVF treatment on distress in first-time IVF patients in a randomized controlled trial. Counselling interventions in infertility treatment focus on expression of emotions and discussion of thoughts related to infertility and its treatment. These interventions are usually characterized by the non-directiveness of the counsellor, the couple format of the sessions and a short duration. Most women who were asked to participate in this study did not think they needed additional psychosocial counselling during their first IVF treatment cycle. Furthermore, men were less likely than women to be interested in additional counselling by a social worker. Consistent with previous stu! dies, our counselling intervention hardly influenced the amount of distress women and men experienced during their first cycle of IVF treatment. At pregnancy testing however, women who had received additional psychosocial counselling expressed less negative affect than women who had received routine care and no additional psychosocial counselling. Although this difference was marginally significant, this result might still indicate that our psychosocial counseling intervention succeeded in reducing unrealistic expectations women might have about IVF success rates. Still, alternative ways to decrease distress related to IVF treatment should also be considered. New â€˜mildâ€™ IVF strategies which combine mild ovarian stimulation with single embryo transfer may represent a more patient-friendly approach than standard IVF treatment. Mild ovarian stimulation protocols with gonadotropin-releasing hormone (GnRH) antagonists are likely to be associated with less physical discomfort and psychological distress than standard ovarian stimulation with GnRH agonists. However, the use of mild IVF strategies, which include single embryo transfer, might also be stressful to patients, as patients seem to prefer double embryo transfer to single embryo transfer because of the increased chance of achieving a pregnancy in a given cycle. The combination of GnRH antagonist co-treatment and single embryo transfer was expected to enable patients to have more treatment cycles with additional pregnancy chances in the same time period as standard IVF, due to a shorter cycle duration and possible fewer side effects associated with mild stimulation. Indeed, th! e results of this thesis show that the combination of single embryo transfer and mild ovarian stimulation can result in similar cumulative term live birth rates over one year of IVF treatment compared to standard stimulation with two embryo transfer, while significantly reducing multiple pregnancy rates. This information, as well as the scientific evidence for the psychological advantages of the use of mild IVF strategies presented in this thesis, might change preferences in favour of mild IVF in patients. Clearly, fertility physicians need to be aware of the importance of counselling patients regarding the implications and decision-making related to IVF treatment. Counselling should not only entail information about term live birth rates and medical risks associated with different IVF treatment strategies for both mother and child. Physicians should also educate patients about the psychological (and social) aspects of infertility and its treatment to enable them to make ed! ucated treatment-related decisions. As the findings of this thesis show, the psychological consequences of different treatment strategies differ during different treatment stages. Therefore, personalised counselling by physicians should be a continuing process throughout all IVF stages, including treatment termination. Increased knowledge of the psychological aspects of infertility in physicians might also lead to an earlier detection of psychosocial problems in IVF patients. Moreover, adopting the psychological consequences model of infertility rather than the cyclical model of stress will prevent patients from feeling shame or guilt about (possible) future treatment failure. Patients who feel free to express negative emotions about their infertility and infertility treatment to their physician might be open to a referral to a social worker or psychologist, when needed. 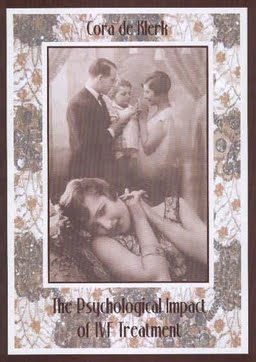