Hantavirus infections in The Netherlands

During the Korean war between 1951-1953, an epidemic occurred among United Nations sanctioned military troops, characterized by fever, haemorrhages, shock and renal failure with a case fatality rate of up to 15%. This disease became known as Korean haemorrhagic fever [Smadel, 1951; Earle, 1954]. Despite extensive investigations at that time no etiologic agent could be identified. In the far east the oldest suggestive description of a similar disease had been made as early as 1000 years ago in a Chinese medicine book [Lee, 1982a]. During the American Civil War between 1862-1866 epidemics of "general dropsy" with renal involvement were noted among northern army troops. This disease was later called "Bright's disease" [Brown, 1916]. In Europe the first descriptions of the disease appeared in the early 1900's, after outbreaks in Russia and Scandinavia [Mayer, 1952; Myhrman, 1934; Zetterholm, 1934]. The Russians called the disease haemorrhagic nephroso-nephritis and the Scandinavians named it nephropathia epidemica (NE). During the trench-warfare of World War I in Europe, several epidemics of NE-like disease occurred among British, French and German troops. In the army medical records of the respective countries this "newly" described disease became known as "trench-nephritis", "nephrite de guerre" and "Kriegsnephritis" [Brown, 1916; Ameuille, 1916; Ullman, 1916]. In World War II several thousands of cases of "Kriegsnephritis" occurred among German troops in northern Finland [Stuhlfauth, 1943; Hortling, 1946]. Gajdusek postulated already in 1962 that all the above mentioned diseases were caused by a single agent or a closely related group of agents [Gajdusek, 1962]. In 1978, more than 25 years after the end of the Korean war, Lee and co-workers isolated the etiologic agent of Korean haemorrhagic fever, - Hantaan virus - from the lungs of Korean striped field mice (Apodemlls agrarills) [Lee et aI., 1978]. Outside Scandinavia and east Asia the first serologically confrrmed human cases of Hantaanlike virus infection were described in Belgium in 1983 [Desmyter et aI., 1983]. Subsequently, it has indeed become clear that all the above mentioned diseases are caused by closely related viruses [Gajdusek, 1982; Lee, 1989] which have now been included in the genus Hantavirus of the Bunyaviridae family. In 1983, the rodentborne viruses serologically related to Hantaan virus, all causing similar clinical symptoms, were labelled under the generic term haemorrhagic fever with renal syndrome (HFRS) [WHO, 1983]. 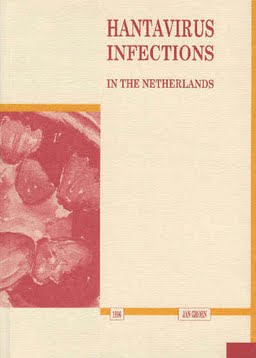