Some children are afraid of the dark, spiders, ghosts, or imaginary creatures, others are apprehensive of something bad happening to their parents or themselves, or worry about doing something stupid in front of others. Nevertheless, fear and anxiety are a normal part of childhood development and can be seen as an adaptive response to stimuli and situations that are potentially threatening or dangerous (Marks, 1987). Normal fear and anxiety in youths shows a clear developmental pattern (Gullone, 2000). Marks (1987) has described this pattern as the “ontogenetic parade”, which refers to the rise and disappearance of certain fears in a predictable sequence during children’s development. That is, in their preschool years, children’s fears are focused on imaginary creatures (e.g., ghosts, witches), animals, strangers, and their natural environment (e.g., the dark, thunderstorms). In middle childhood, fears of physical danger, bodily injury, and school performance become more prominent, whereas during adolescence, youths more often report fears about social evaluations and interactions, death, and illness (Bauer, 1976; Muris, Merckelbach, Gadet, & Moulaert, 2000). Fear and anxiety are thought to come up and disappear following this predictive pattern because they are linked to different developmental stages and the specific dangers that children encounter during these stages (Marks, 1987). For example, fear of strangers and separation anxiety become manifest around the time that infants have learned to differentiate between familiar and unfamiliar faces, whereas fear of heights usually develops around the time infants start crawling. When children have acquired these cognitive and/or physical skills, they encounter potential dangers (e.g., strangers, heights) for which they do not already have developed sufficient cognitive capacity to understand. Therefore, children develop fears to protect them from these potential dangers by triggering the appropriate safety responses (e.g., avoiding strangers or avoiding heights). When children acquire the cognitive abilities to understand the potential dangers of these situations and learn how to deal with them, their fear or anxiety for these stimuli or situations usually abates. Thus, it seems that children’s fears and anxiety are closely linked to their cognitive and physical development. 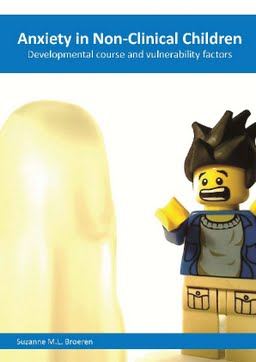