The study described in this thesis represents an attempt to identify possible factors determining the induction of operational tolerance after LTX. Current beliefs propose that the establishment of tolerance is a multifactorial phenomenon in which the combined action of several factors conveys tolerance towards the grafted organ. Among these factors, the transfer of passenger donor leukocytes into the recipient after transplantation and the secretion of specific donor-derived soluble MHC molecules seem to play a relevant role. In this thesis we considered two components as possible inducers of LTX tolerance: donor NK cells (as part of the pool of passenger donor leukocytes) and HLA-G (as soluble HLA molecule). We analyzed different aspects of donor hepatic NK cells as to investigate their contribution to tolerance induction in LTX. Additionally, we laid the foundations for a critical assessment of the role of HLA-G as a tolerogenic molecule in LTX. Our results suggest that hepatic NK cells in adults derive from hematopoietic CD34+ stem cells that are continuously recruited from peripheral blood (Chapter 5). Hematopoietic CD34+ stem cells are known to be periodically released from the bone marrow into peripheral blood. This continuous release of cells into peripheral blood seems to constitute a mechanism to maintain full occupancy of hematopoietic stem cells niches not only in bone marrow cavities but also in peripheral tissues, including the adult liver. Once relocated in the liver, these early progenitors may develop, under the influence of the local microenvironment, into liver-specific NK cells (Chapter 5). Liver-specific NK cells contain a unique subset of CD56bright NK cells that are physiologically activated and highly cytotoxic (Chapter 2). These characteristics of hepatic CD56bright NK cells differ from the functional properties attributed to the same subset of NK cells found in blood or in other peripheral tissues, such as lymph nodes or uterus. After LTX, part of donor hepatic NK cells detach from the grafted organ and are detectable in the recipient circulation for approximately two weeks (Chapter 2). Besides this portion of migrating cells, donor hepatic NK cells remain in the grafted liver for at least two years after LTX (Chapter 5). This long-term chimerism can be explained by two scenarios. First, donor hepatic NK cells and their precursors may relocate, after LTX, to specific sites in the recipient (such as bone marrow, gut-associated lymphoid tissues or spleen, see Chapter 2) and from there contribute to long-term donor NK-cell chimerism. Alternatively, the donor NK cells found long after LTX within the liver graft may constitute a pool of long-living NK cells similar to the ones recently described in mice liver by the groups of von Andrian, Lanier and Cooper. Overall these observations in mice indicate that NK cells activated specifically by a chemical hapten or a virus, or non-specifically by a state of lymphopenia or by inflammatory cytokines acquire classical characteristics of immune memory that include an extended lifespan, the ability to self-renew, and the capacity to mount robust and protective recall responses. However, as specific markers for human memory NK cells are not known yet, we could not test whether donor hepatic NK cells long after LTX actually represent a pool of NK cells that acquired immune memory. With regard to the role of these donor-derived NK cells in the induction of allograft tolerance after LTX, we could not find firm evidence that NK cells play a prominent role in tolerance induction (Chapter 3; Chapter 4). In fact neither donor nor recipient NK-cell alloreactivity, as predicted by considering donor and recipient HLA/KIR genotypes, was found to correlate with LTX survival or the induction of allograft tolerance (Chapter 3). Additionally, specific depletion of hepatic donor NK cells prior to LTX in a spontaneously tolerant rat model, did not affect the establishment of tolerance (Chapter 4). Altogether, based on these results we reject the hypothesis that cytotoxic NK cells from the donor liver play a main role in inhibiting the immune response towards the allogeneic graft by killing alloreactive T cells and APCs from the recipient. Therefore, these results exclude the possibility of exploiting the cytotoxic properties of donor hepatic NK cells for tolerance induction in clinical LTX. In addition to the study of NK cells, we here presented our initial attempts to assess the role of soluble HLA-G in LTX tolerance. In contrast to what was suggested by few original studies on this topic, our first results seem to associate HLA-G with states of inflammation rather than tolerance induction (Chapter 6). These results will be further expanded and additional experiments are needed to draw more definite conclusions on this subject. 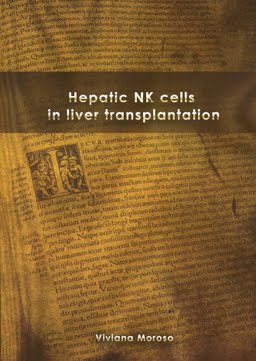