Mozambique has been a centralized State since its independence in 1975. During this time, local government has depended on the Central Government and has lacked autonomy in both local policy decisions and resource management in addition to the complete failure of effective local services delivery. However, from the first democratic local elections in 1998, municipalities have put in place new structures and more participatory processes to aid decision-making and implementation. They have also each elected a mayor and a municipal assembly, the latter representing local communities, and they have enjoyed more autonomy in decision-making and management of financial resources. The study seeks to assess the extent to which these new structures and decision-making processes are able to respond to the needs and wants of the communities they claim to represent. Considering that the aim of decentralization down to the local level is to cure the ills of centralization of decision-making, when devolving powers and competences to municipalities, it is important to develop local capacities for effective basic service delivery coverage. Since these are new institutions, the study also identifies and examines if the capacity-building initiatives delivered by Central Government, donors and non-governmental organizations to these municipalities address the gaps in their capacity to deliver services. Because decentralization is a relatively new phenomenon in Mozambique, there is a lack of literature in the area. This research contributes to fill the gap and provides a detailed framework that combines leadership, politics and local government capacities to translate participatory approaches to governance into positive results. This study took place in five Mozambican municipalities: Dondo, Matola, Manhiça, Nacala-Porto and Chimoio. The Mozambican municipal governments are meant to involve various actors, namely local community members, community-based organizations and non-governmental organizations, the private sector and others in the process of decision-making to respond to local needs effectively. The study looks at the following factors: leadership personal characteristics, institutional set-up and influence of political parties in decision-making. Apart from these political factors, this study examines other explanatory factors involving local government capacities namely the capacity to plan and make decisions, local government administrative capacity, local government financial management capacity and local government capacity to convene. These factors explain improvements in basic service delivery coverage. In some instances, ineffective leadership, inefficient administrative services and financial management explained poor service delivery coverage. Although the decentralization process is still relatively in its infancy, the research found that the existing municipal capacity to deliver services was still poor in most municipalities studied except Dondo and Matola. Apart from this, the impact of capacity-building initiatives delivered by donors, Central Government and non-governmental organizations to these new municipalities remained weak and municipalities still had shortage of qualified staff, infrastructure, finances, work materials and equipment. Because of these slow and weak capacity-building initiatives, local service delivery coverage was still unsatisfactory to local communities in most municipalities studied. In addition, although the Local Government Act (1997) seems to be clear and addresses most relevant issues concerning devolution, the Central Government resists change from fear of the unknown and departure from the status quo. Although it takes time for municipalities to learn and deliver services effectively, it seems that patron-client relationships pervaded the entire municipalization process, affecting service delivery negatively. In the end, a decentralization process intended as de-concentration for districts and devolution for municipalities became de-concentration for both districts and municipalities. Evidence also indicates that the party in power applies the majority democratic system to stifle political party competition and participation, to stimulate ruling party monopoly in decision-making, poor accountability and to limit the voice of the minority. In this regard, a single-party system is re-emerging in a country that claims to be a multiparty democracy. 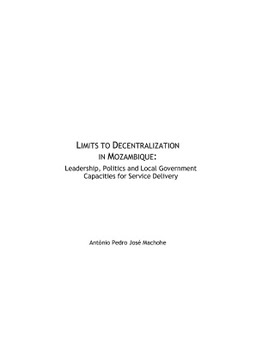