Irinotecan: from clinical pharmacokinetics to pharmacogenetics

Four decades ago, a plant alkaloid was isolated from the Chinese tree Camptotheca acuminata (Nyssaceae family), which showed promising antitumor activity in vitro (1 ). At that moment, a relatively new class of anticancer agents was born. Unfortunately, during clinical trials, this alkaloid, called camptothecin (CPT), showed severe and unpredictable side effects (myelosuppression, diarrhea, and hemorrhagic cystitis), which were unmanageble during this early chemotherapeutic era (2-4). Later on, the drug's relative lack of hydrophility was found to be the main reason for these adverse events. Despite this ''false starf', renewed interest in this compound was found after the elucidation of its mechanism of action during the mid-1980s (i.e the inhibition of topoisomerase I; ref. 5-7). Topoisomerase I is an essential enzyme in DNA replication and RNA transcription and is present in all eukaryotic cells (8). In the physiologic state of the cell nucleus, DNA is double-stranded, super-coiled and fits tightly into a chromosome. To synthesize new DNA, this topological constrained DNA should unwind. To this end, topoisomerase I binds to the DNA, forms a covalent reversible adduct (which is called the cleavable complex), cleaves a phosphodiester bond and a single-strand break occurs (6). Next, the DNA molecule is able to rotate freely around its intact single strand, and relaxation of DNA takes place. After the religation of the cleavage, the enzyme dissociates from DNA. The cleavable complex usually binds for a short period, just to allow the single strand to unwind (9, 1 0). CPT induces the stabilization of the cleavable complexes (11, 12), what will lead to a disruption of the DNA-strand when the replication fork meets the cleavable complex (7). This doublestrand break will lead to the activation of apoptosis pathways and ultimately result in cell-death (7). In subsequent years, various derivatives of CPT with improved water solubility have been developed, of which irinotecan (CPT-11) was considered to be among the most promising ones (13). It is a semisynthetic water-soluble prodrug, with minor intrinsic cy1otoxic activity. After administration, the drug is partially converted into the 1 00- to 1 ,000-times more active metabolite SN-38 by the enzyme carboxyl esterase (14-17). In the liver, SN-38 is de-toxified by undine-diphosphate glucuronosyltransferase 1 A isoforms, whereby SN-38-glucuronide is formed (18). All these compounds can be secreted into the bile by specific transporters (19). In the intestines, several bacteria produce ~-glucuronidase, which enables re-activatation of the glucuronidated form of SN-38 (20). Relatively high concentrations of SN-38 will lead to damage of the bowel mucosa, which results in one of the drug's most prominent side effects: diarrhea (21). In addition, irinotecan can also be oxidated by cy1ochrome P450 isozymes (22, 23), which will lead to the formation of several inactive metabolites, including APC and NPC. 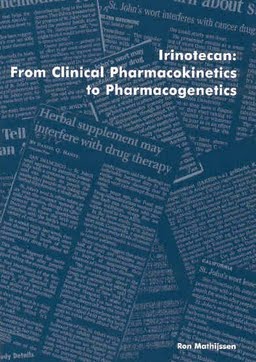