Long-term outcome of psychopathology in childhood and adolescence : a clinical epidemiological study

Very different populations were used in these studies, two populations consisting of adolescents only (Otto and Otto, 1978 and Rey et al., 1995, 1997), one population existing of males only (Steinhausen, Meier, and Angst, 1998), and all studies differing on in- and exclusion criteria. This leads to difficulties in comparing results. Excluding the all male sample (Steinhausen, Meier, and Angst, 1998), populations consisted of an average of 64.5% males and 35.5% females. Response rates were on average 90.4% for studies using records or registers only, and 65.9% for studies using direct assessment. Only one study used standardized measures with well-validated, empirical syndromes at both times of assessment (Stanger, et al., 1996). This was also the only study in which multiple informants were used, but unfortunately at follow-up only. Analytic strategies were very different across studies, so comparison at result level is extremely difficult. Still, some general conclusions can be drawn. Among others, these studies seem to confirm the stability and continuity of psychopathology found in general population samples, especially for externalizing problems. Unfortunately no average figures can be given, because different analytic strategies resulted in incomparable measures (e.g., percentages and stability coefficients). Furthermore, most authors agree that other domains of functioning are likely to be hampered as well, e.g., family relations, educational and professional achievements, and social functioning, and that other indices of poor functioning are increased, e.g., mental health service use and judicial contacts. Results indicate that prognosis can to some extent be predicted from factors known at initial assessment, such as age at intake, gender, length of follow-up period, socio-economic status, or initial type of problem. However, the inconsistency of results across studies on these related factors hampers drawing firm conclusions on their influence. Results led us to expect considerable stability of psychopathology, and to expect the type of problems to remain mostly the same across time, and at follow-up to be predicted by comparable problems at intake. 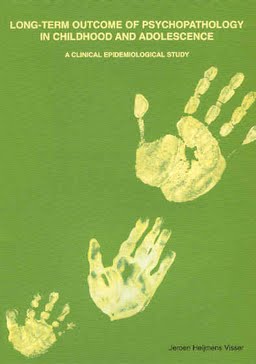