Signaling pathways and stem cells in uterus and fallopian tubes

During her fertile years, the endometrium of fertile women undergoes regular cycles of regeneration, differentiation and shedding, driven by changing concentrations of the steroid hormones estradiol and progesterone. In the present study, the role of Wnt/β-catenin signaling in relation to steroid hormone signaling and the balance between proliferation and differentiation was investigated. Furthermore, since the consequence of hormone signaling in the endometrium is tissue degradation followed by regeneration, the role of stem cells was also investigated. Chapter 1, the introductory chapter, reviews what is known about a functional link between steroid hormone signaling, Wnt/β-catenin signaling, and endometrial physiology. In the normal human menstrual cycle, estradiol induces proliferation during the first two weeks, whereas during the third and fourth week of the cycle progesterone inhibits this estradiol-induced proliferation thus stimulating cellular differentiation. The two steroid hormones also play a role in oncogenesis of the endometrium: unbalanced hormone signaling can induce endometrial hyperplasia which may continue to develop into endometrial cancer. Elevated estrogen receptor signaling, caused for example by overweight or use of the synthetic analog tamoxifen, significantly increases the risk of endometrial carcinogenesis. The role of Wnt signaling in initiation, development and function of the female reproductive tract, investigated, in particular for mouse, is significant. There are good indications that hormonal regulation of the human menstrual cycle during reproductive life is also mediated by estrogen-induced activation and progesterone-induced inhibition of Wnt/β-catenin signaling. Similar to elevated estradiol signaling, constitutive activation of canonical Wnt signaling has been associated with the development of human endometrial cancer. Activation of Wnt/β-catenin signaling can be caused by mutations that affect β-catenin degradation, in women and in mouse models. These mutations result in β-catenin protein stabilization which, upon translocation to the nucleus, can activate transcription of Wnt/β-catenin target genes. Chapter 2 describes the role of constitutive activation of Wnt/β-catenin signaling during uterine development using a novel mouse model (Amhr2Cre/+;Apc15lox/15lox). It was observed that the promoter of Amhr2 was mainly active in myometrial cells. Furthermore, PCR results confirmed that recombination of the Apc15lox allele occurred exclusively in the myometrial region of the uterus. Consequently, the main phenotype in these Apc conditional knock-down mice was loss and aberrant organization of the myometrial muscle fibers. As a result, endometrial tissue was sometimes observed in the myometrial layer, a phenomenon which in our opinion is a passive rather than an active invasion process. A mouse model to activate Wnt/β-catenin signaling specifically in the epithelial cells of the developing Mϋllerian ducts, unfortunately is not available. Hence, we cannot exclude that there might be an additional role for this signaling pathway, directly targeting the epithelial cells and their derivatives. As described in Chapter 3, it was investigated how progesterone regulates Wnt/β-catenin signaling. Among the genes regulated by progesterone in patients, DKK1 and FOXO1 as well as genes encoding other known inhibitors of Wnt/β-catenin signaling, were identified and selected for further investigations. First, it was established that during progesterone-driven inhibition of Wnt/β-catenin signaling, both DKK1 and FOXO1 gene expression were induced. Secondly, it was observed that progesterone could not inhibit Wnt/β-catenin signaling in the endometrial cancer cell lines in the absence of DKK1 and FOXO1 (by the use of lentiviral sequence-specific shRNAs). To put the observed results in a clinical perspective, patient samples (hormone treated endometria, hyperplasia and endometrial cancers) were evaluated for Wnt signaling activation using a histochemical approach. On the basis of these results it was concluded that the Wnt inhibitory effect of progesterone action is likely to play a rate-limiting role in the maintenance of endometrial homeostasis and, upon loss of progesterone signaling, in tumor onset and progression towards malignancy. In Chapter 4, the research focused on the identification, characterization and isolation of stem cells of the female reproductive tract is presented. The initial observations were well in line with those published in several papers by the group of Gargett et al. (2004, 2006, 2009), where they reported short-term label-retaining cells in the uterus. In subsequent experiments, we found a new population of long-term label-retaining cells at the distal oviduct. These cells were isolated and were shown to be able to form undifferentiated spheroids in stem cell medium, to self-renew upon re-culture of spheroid cells, and to differentiate into glandular structures which expressed markers of mature Műllerian epithelial cells. Based on these findings, it is suggested that these quiescent, stem-like cells located within the distal oviduct might contribute to the homeostasis of at least part of the female genital tract, in particular concerning the cyclic regeneration of the epithelial lining of the endometrium and the maintenance of the oviduct. Chapter 5 provides a general discussion, where the significance of the current findings is put into a broader perspective. 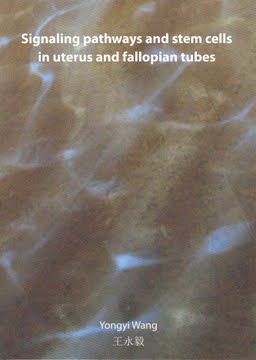