In adults, personality disorders are among the most common mental disorders in the general population (Torgersen, Kringlen, & Cramer, 2001) and patient samples (Zimmerman, Rothschild, & Chelminski, 2005). Prevalence rates vary from 13.4% in the general population, to 56.5% in treated addicted patients, and 60.4% in psychiatric outpatients (Verheul & van den Brink, 1999). Furthermore, among adults seeking specialized treatment, personality disorders are associated with low quality of life (Soeteman, Verheul, & Busschbach, 2008) and high societal costs (Soeteman, Hakkaart-van Roijen, Verheul, & Busschbach, 2008). Since the inclusion of personality disorders in the DSM-III in 1980, much research has been conducted investigating the effectiveness of treatments for these patients. Based on this literature, psychotherapy is generally considered the treatment of choice for adult patients with personality disorders (Landelijke Stuurgroep Richtlijnontwikkeling in de GGZ, 2008). Much less is known about personality disorders in adolescents. To the best of our knowledge, the study of Grilo and colleagues (1998) is the only published prevalence study among adolescent patients. Most research on personality disorders in adolescents is derived from the Children in the Community study (CIC; see for example Chen, Cohen, Kasen, & Johnson, 2006; Johnson et al., 2000; Johnson, Chen, & Cohen, 2004; Kasen et al., 2007), which was carried out in the general population. Valuable information to yield arguments in favor of reimbursing treatments for this particular patient group, like the burden of disease or costs, is virtually non-existing. Furthermore, there are almost no outcome studies available in this particular group of patients. This thesis aims to address these above mentioned issues, thereby filling in the existing gap. 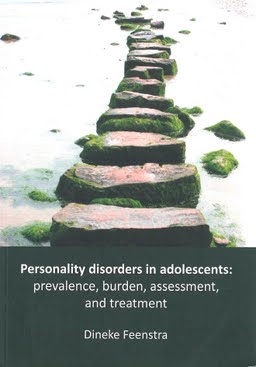