In the history of accident research much emphasis has been laid on general statistics, different types of case studies concentrating on various personal factor-s, circumstantial influences etc. Often, in certain waves, the unequal initial liability theory (the accident proneness concept; Greenwood and Woods, 1919), the search for personality traits, determining a personal vulnerability for accidents, dominated the research programs. Apart from methodological criticism (e.g. Arbous and Kerrich, 1953) other theories evolved (Hale & Hale, 1972), like the adjustment/stress theory (Kerr, 1950), situational and task-related theories (e.g. Winsemius, 1969; Surry, 1969) or the domino theory (Heinrich, 1950). Additionally, under the influence of ideas formalised in epidemiology accidents tended to be regarded as one of the "modern epidemics", and should be approached with epidemiological methods (Gordon, 1949; McFarland et al, 1955). Of course, accidents have some relation to health problems (injury, death) although the causal association between the occurrence of accidents and an eventual health problem is not fully understood. This applies to accidents in general as well as to traffic accidents. One of the first comprehensive studies in this respect was "The causation of bus driver accidents; An Epidemiological study" published by Cresswell and Froggatt in 1963. Not only the title, but also the methods used in this thesis, is inspired by this epidemiological tradition in accident research. In the interpretation of the results, however, links have been made with physiological, psychological and ergonomic theories. In 1977 a start was made at the Netherlands Institute for Preventive Health Care/TNO with a project, of which the purpose could roughly be defined as follows: to develop a useful measuring instrument capable of demonstrating the (assumed) effect of the performance of a task on the task performer and, assuming that this would prove possible, to ascertain to what extent the task effect changes under different task conditions. After a series of discussions with the members of the Steering Committee for Indusltrial Health Care of the Royal Netherlands Association of Transport Companies, in which employers, workers and industrial health-care are represented, it was decided to set up a project for examining the effect of the bus driver's task on the individual bus driver. The project contained two different studies: I. an experimental field study involving various psychometric and physiological measurements - results of this study will be reported elsewhere; II. this thesis and the papers of which it is composed, concerns the other part of the project: an accident analysis; this analysis has been carried aut on the accidents of the bus drivers employed by a large bus company in the Western part of the Netherlands. It was assumed that the occurrence of a traffic-accident could contain information about possible effects of the task performance of a bus driver, and of the conditions of this task, on the performer. This accident study contains two parts. An initial explorative investigation of the accidents in one branch could be followed by a second study of the accidents of another branch of the same bus company. In this second part the hypotheses derived from the results of the first part were tested. The topics of interest that will be dealt with in this thesis are theoretical and practical problems of accident research, associations of accident risk with some personal factors like age and experience, and with environmental (task-related) factors like type of shift and time on task. 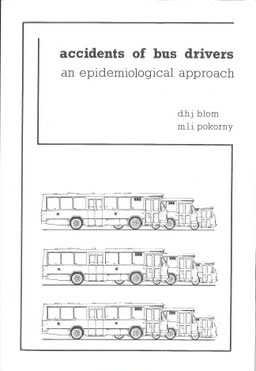