Treponemal diseases important to mankind are sexually transmitted syphilis and the endemic nonvenereally transmitted treponematoses (yaws, pinta, and endemic syphilis). Historically, the most important disease caused by treponemes is syphilis. During the last few decades, yaws, endemic syphilis and pinta have been largely ignored. These diseases, however, have not been eradicated (1-10). The causative agents of these chronic bacterial diseases belong to the order Spirochaewles, the family Treponemataceae and the genus Treponema. The order Spirochaetales comprises the families Treponemataceae and Spirochaetaceae. The Treponemataceae can be subdivided in: the genus Treponema (pathogenic, saprophytic, and special strains, for example the Nichols strain), the genus Borrelia and the genus Leptospira, respectively (11). Species pathogenic for humans are enumerated in Table !. Hitherto, it has not been possible to cultivate these species in artificial media or in tissue culture, which greatly hampers research (12, 13). Moreover, it has not been possible to distinguish the causative agents of venereal syphilis and the endemic treponematoses routinely by morphological or immunological criteria or by DNA hybridisation studies. DNA homology studies (14) appear to support the view that syphilis and yaws are possibly caused by the same organism (''unitarian" theory) (15). Shared antigens give rise to cross-reactive antibodies common to all treponema! diseases, which so far precludes a differential diagnosis on the basis of serological tests. However, clinical and geographical differences between the treponematoses do exist. T.pallidum, a Gram-negative bacterium, is a microaerophile, which requires low concentrations of oxygen for optimal in vitro survival. This slender, close-coiled, regular spiral-shaped organism, 6-15 micrometer in length, with an average breadth of 0.15 micrometer, with a variable number of regular coils, has a wavelength of approximately 1 micrometer and an amplitude of 0.2 to 0.3 micrometer (13). At each end of the protoplasmic cylinder, periplasmic flagella (axial filaments, axial fibrils, endoflagella) are present within the outer membrane, which are assumed to play a part in locomotion. Cytoplasmic fibrils (microtubules) extend along the inner layer of the cytoplasmic membrane, below the periplasmic flagella. The outer membrane resembles the outer membrane of Gram-negative bacteria. A rotary motion with flexion and back-and-forth motion is considered characteristic. The best method to visualise the microorganism is with darkground illumination or phase contrast microscopy (13,16-18). In the following paragraphs some aspects of the clinical manifestations and research of venereal syphilis are described. Separately some of the current problems with venereal syphilis due to the AIDS epidemic are mentioned. After this paragraph the endemic treponematoses are reviewed, with special emphasis on the current resurgence of yaws 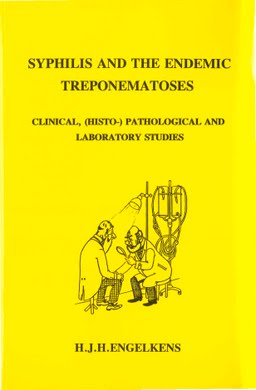