Percutaneous Coronary Interventions Percutaneous coronary angioplasty was first introduced by Andreas Gruentzig in 1977 as a non surgical method for coronary artery revascularization. Although initially restricted to stable patients with single, discrete, concentric, noncalcified stenoses, percutaneous revascularization is now routinely applied to patients with multivessel disease, multiple lesions, complex lesions, acute coronary syndromes, and left ventricular dysfunction. Refinement of the equipment used to perform angioplasty and utilization of adjunctive periprocedural medications, together with time and growing experience played a major role in the explosive growth and popularity of percutaneous coronary interventions (PCI). The most important advancement in the field of percutaneous coronary interventions was the introduction of coronary stents, which reduce both the acute risk of major complications and the incidence of restenosis. With modern techniques, procedural success > 90% is readily achieved, and the risk of sudden arterial occlusion and subsequent myocardial infarction is very low. Long-term survival has been shown to be not different from that achieved with bypass surgery, therefore in many countries percutaneous coronary interventions have become the preferred strategy for coronary revascularization. Restenosis Restenosis, defined as the vessel lumen renarrowing following a successful percutaneous coronary intervention, represents the principal limitation to the long-term outcome of coronary angioplasty. Restenosis is a pathobiological process caused by the arterial healing response after vessel injury, and is due to varying degrees of elastic recoil, vascular remodeling, and neointimal hyperplasia. The only widely accepted means of reducing restenosis is the coronary stent, which virtually eliminates vessel elastic recoil and negative remodeling following balloon dilatation. However, the efficacy of this purely “mechanical” approach to the prevention of restenosis has been hampered by the development of a new iatrogenic disease: in-stent restenosis, which is predominantly due to neointima formation. In-stent restenosis has been reported to occur in 10 to 50% of the patients in several series, 7 depending upon a number of clinical, angiographic, and procedural variables. Furthermore, treatment of ISR is frequently a challenging clinical problem, with recurrent restenosis being reported in up to 80% of the patients in the most complex cases. The development of neointimal tissue is thought to relate to a combination of coagulation cascade activation, platelet deposition, organization of thrombus, growth factor stimulation, and is due mainly to smooth muscle cell proliferation and migration, and excessive extracellular matrix production. 9 Smooth muscle cell proliferation has therefore become the main target in the effort to prevent or reduce in-stent restenosis. 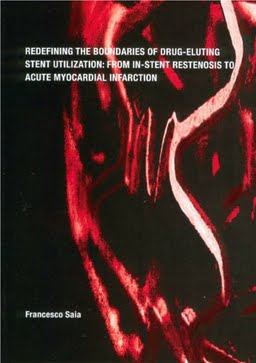